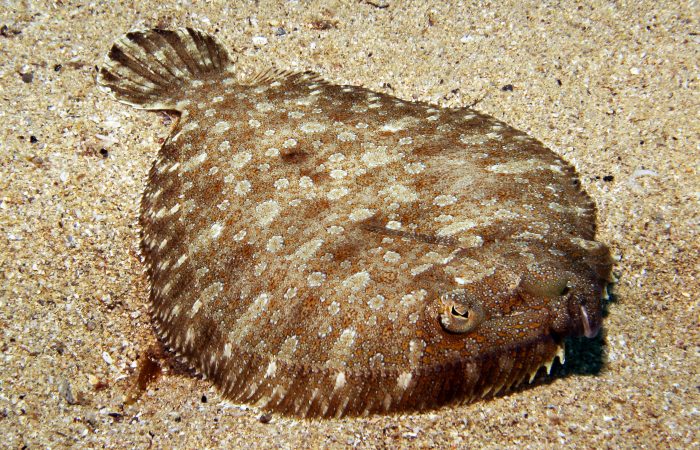 Bothus podas, the Wide-Eyed Flounder, is a type of flatfish and is native to the Mediterranean Sea and the eastern Atlantic Ocean.

The Wide-Eyed Flounder is a demersal fish, found in shallow waters, over sandy and muddy bottoms of the continental plateau at depths varying from 5m to 400m.  Although its maximum length could be 45cm, it typically grows to a length of 13 centimetres.  The width is about half its length.

Bothus podas‘s diet consists mainly of fish spawn, benthic small fishes and invertebrates such as crustaceans and polychaetes.  They ambush their prey, feeding at soft muddy areas of the sea bottom, near bridge piles, docks and coral reefs.  Reproduction occurs between May and August.

In its life cycle, an adult flounder has two eyes situated on one side of its head, while at hatching one eye is located on each side of its head.  One eye migrates to the other side of the body through a process of metamorphosis as it grows from larval to juvenile stage.  As an adult, a flounder changes its habits and camouflages itself by lying on the bottom of the ocean floor as protection against predators.  As a result, the eyes are then on the side which faces up.  The side to which the eyes migrate is dependent on the species type.

The photo of this Wide-Eyed Flounder was taken at a depth of 10m at Mġarr ix-Xini, on Gozo’s south coast.