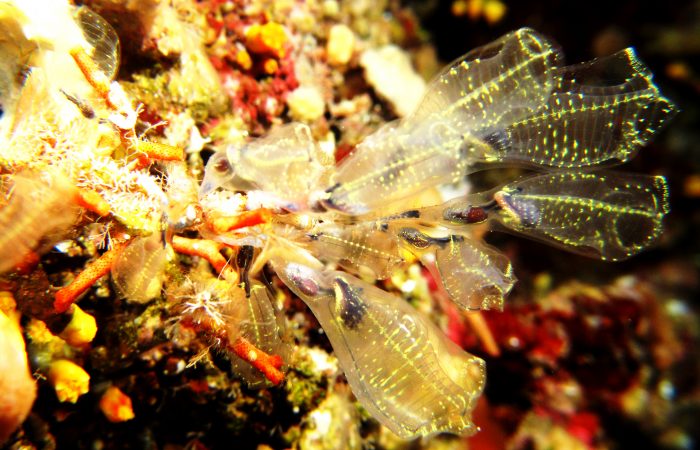 Clavelina dellavallei, the Light Bulb Tunicate, is a colonial ascidian native to the eastern Atlantic Ocean and the Mediterranean Sea.  Colonies live on rocky bottoms, attached to rocks, sea-fans or seaweeds at depths varying from one meter to 50 meters.

Clavelina dellavallei forms small colonies, each individual being bound by creeping stolons, although isolated individuals may also be observed.  Each zooid is divided into three sections: thorax, abdomen and post-abdomen.  It has a cylindrical shape, being united by the stolons by means of a peduncle without a common mantle.  It has up to 15 buccal tentacles.  Its coloration is transparent with a bluish hue, sometimes even pink, with each individual reaching a maximum size of up to 5 cm in length.

The pharynx has 13 to 17 rows of stigmata which are clearly visible.  The same can be said of the white or bluish vertical line of the endostyle.  Siphons are close and prominent.  The atrial siphon may be underlined by a blue-purple margin.  In the lower part of the zooid, the purple stomach and intestine are also visible.

Tunicates of this type feed by water filtration.  In the entrance siphon they ingest the water and the food and by the outlet they expel the water and the substances of rejection.  They feed on plankton, which is retained by the mucus forming inside it.

The Light Bulb Tunicates are hermaphrodites.  The food intake system also allows the entry of sperm that the other organisms of this species expel.  The eggs are kept in the interior until hatching.  The larvae swim free in the plankton until then, they attach to a rocky substrate and once there, they undergo a metamorphosis that lasts between 2 to 3 days, thus passing to the adult form.

Ascidia like Clavelina dellavallei accumulate in their tissues important quantities of copper and lead, especially those which dwell inside harbours, where they absorb part of the components of the anti-fouling paint applied to the boats’ hulls.  Besides this, scientific studies have demonstrated important genetic differences within this species depending on their habitat.  In fact, Clavelina dellavallei living inside harbours, are significantly larger in size than other relatives colonising open waters.

The photo of these Light Bulb Tunicates was taken at a depth of 18m at the entrance to Coral Cave on Gozo’s west coast.