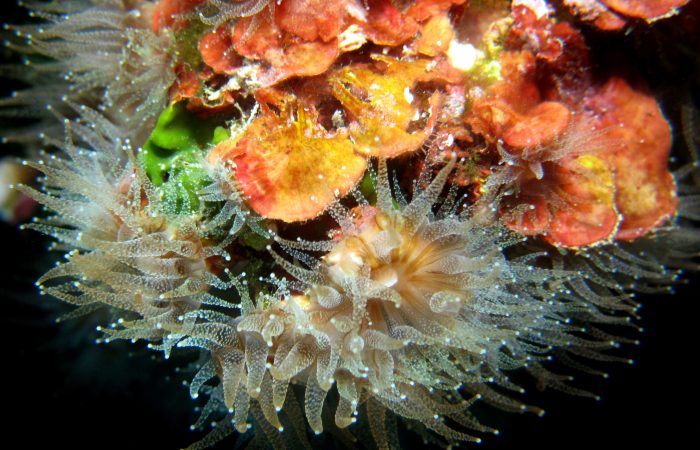 Phyllangia americana mouchezii, the Mediterranean Stony Corals (a.k.a. the Hidden Cup Corals or the Dark Colonial Coral), are an azooxanthellate coral found along the eastern coast of the Atlantic Ocean and parts of the Mediterranean Sea, also including the Maltese Islands.

Phyllangia americana mouchezii is a subspecies of Phyllangia americana, which is very well distributed in the western Atlantic, ranging from the Florida coastline, throughout the West Indian islands.  The genus Phyllangia belongs to the family Caryophylliidae, order Scleractinia, subclass Hexacorallia, class Anthozoa, phylum Cnidaria and kingdom Animalia.

The geological history of the Mediterranean is quite a thrill ride.  As the formal scientific name of this coral indicates, the species colonized the Mediterranean from the Atlantic ocean following the end of the Messinian salinity crisis 5.3 million years ago.  Indeed, the Mediterranean Stony Corals can tolerate a temperature range of 13 to 31 degrees Celsius, and a salinity range of 15 to 36.4 parts per thousand.

The flower-like polyps vary in colour from yellow-brown to red-brown, and often become overgrown by algae and sponges.  The circular skeletal wall of each polyp has six septa, protruding inwards, while circular skeletal ridges may be visible around the outside.

When we talk about corals, we always conjure up the iconic image of highly fragile tropical reef-building symbiotic organisms in crystal clear shallow waters.  The stony corals living in cold waters are striking in this matter.  They show that this symbiotic relationship between the two evolutionarily distant partner organisms can break down (coral bleaching) or never evolve when conditions are less than optimal.

The Mediterranean Sea is a rather nutrient-poor sea with low productivity.  Lacking a photosynthetic partner, stony corals cannot compete with other species such as sponges and encrusting algae for space in light exposed hard rocky surfaces.

As a result, nutrients are obtained by digesting free-floating microorganisms, which are trapped in protruding tentacles, or from dissolved organic matter.  Most corals exhibiting this behaviour are restricted to depths where light does not penetrate.  Colonies of the hidden cup coral grow through a form of asexual reproduction known as budding, in which the parent polyp divides to form new daughter polyps.

Thus, the Mediterranean Stony Corals are confined to marginal habitats such as the underside of rocks, ledge overhangs, cave ceilings and cavern walls, with currents just sufficient to bring enough nutrients.  These corals can also be seen inside wrecks that serve as artificial reefs, within a depth of two to over 80 metres.  Nevertheless, stone corals continue to build modest reefs through a single-cell thick tissue layer called calicoblastic epithelium.  This cell layer facilitates biomineralization of calcium in the form of aragonite.

Stony corals (Scleractinia) are known as polyps and have a cylindrical body crowned by an oral disc in which a mouth is fringed with tentacles.  Although some species are solitary, most are colonial.  The founding polyp settles and starts to secrete calcium carbonate to protect its soft body.  Solitary corals can be as much as 25 cm across but in colonial species the polyps are usually only a few millimetres in diameter. These polyps reproduce asexually by budding, but remain attached to each other, forming a multi-polyp colony of clones with a common skeleton, which may be up to several metres in diameter or height according to species.

The photosof these Mediterranean Stony Corals was taken at a depth of 20m at Ras il-Ħobż on Gozo’s south coast.