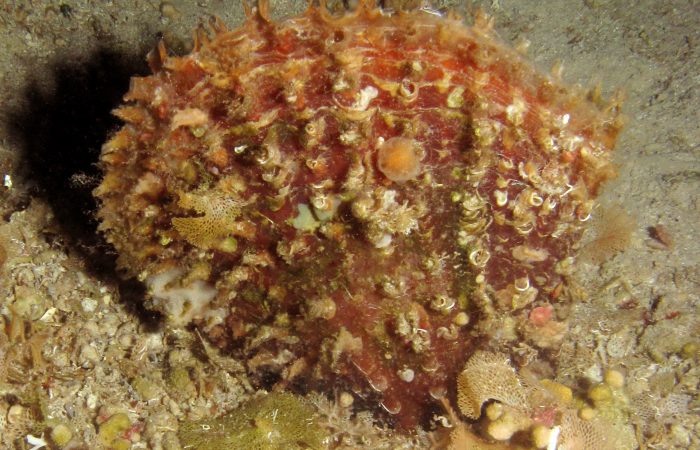 Pinna rudis, the Rough Pen Shell (a.k.a. Spiny Fan-Mussel or the Maltese common name Nakkra tax-Xewk), is a species of Mediterranean clam, a marine bivalve mollusc in the family Pinnidae, the pen shells.

The Rough Pen Shell is found in the seas around Malta in the Mediterranean Sea, and connecting parts of the Black Sea and the eastern Atlantic Ocean.  According to some sources, it also occurs in the tropical areas of the Caribbean Sea.  However, it can easily be confused with Pinna carnea.

Pinna rudis has a shell that commonly reaches a length of 25 to 30 cm.  The Rough Pen Shell has a pair of very fragile, long, triangular, wedge–shaped valves, covered with large, protruding scales arranged in quite regular rows.  These scales are more prominent close to the opening of the shell.  Five to ten low ribs radiate from the pointed end and run the length of the valves.  These valves are almost symmetrical, toothless, and transparent on the ends.  Their colour is usually reddish brown.  The rear edge of the shell is rounded and free.

The Rough Pen Shell lives with the pointed anterior end of its shell vertically anchored to rock or firm sediment by numerous strong, iridescent fibres known as byssus threads.  This is the famous ‘golden fleece’ of Greek myth.  Woven into a fine yarn called sea silk, it has been used to make fine gloves, stockings and other items.

Pinna rudis may be confused with juveniles of Pinna nobilis, but the former shows a more triangular and robust shell, with fewer and larger protruding scales.  Moreover, in Pinna rudis, the colour is browner or pink-orange, while in juveniles Pinna nobilis, it is homogeneously yellowish.

The adults of Pinna nobilis easily exceed the size of Pinna rudis and totally lose the protuberances on the surface of the shell.  Also, the habitats of the two species are different, as Pinna nobilis can be found on muddy or sandy bottoms, while Pinna rudis prefers rock crevices.

Pinna rudis lives in small patches of sand in rocky bottoms and in rock crevices, at depths ranging from the surface to 70 metres.  Even though one can find the Rough Pen Shell in shallow waters, they are more common in depths between 20 and 70m.  In any case, it prefers areas which are protected against water movement.

Like almost all other bivalves, the Rough Pen Shell is a filter feeder.  Its diet consists of small particles, such as plankton, which it filters out of the water.  Water is drawn into the shell from above and passed over the ctenidium before being expelled into the open water at the exposed part of the shell.  It is a hermaphrodite, the gonads producing both sperm and ova (eggs).  The larvae are planktonic and drift with the currents until they settle at a certain, fitting site.

The photo of this Rough Pen Shell was taken at a depth of 25 metres at Hekka Point on Gozo‘s north coast.