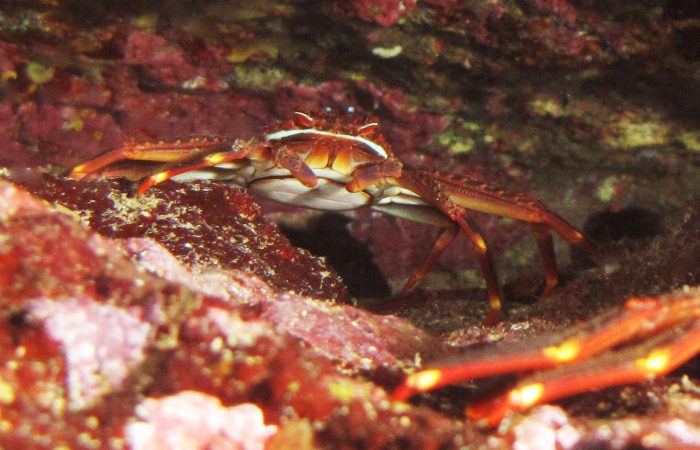 Percnon gibbesi, the Sally Lightfoot Crab (a.k.a. the Nimble Spray Crab), is a marine crab species.  It is one of the most widespread grapsid crabs, being found on both sides of the Atlantic Ocean, on the Pacific coast of North America and now also around the Maltese Islands and the Mediterranean Sea.

Percnon gibbesi is the most invasive decapod crustacean to have entered the Mediterranean Sea.  The vessel-transported crab was first recorded in 1999 from the Balearic Islands and Sicily.  Since then it has since spread to the Tyrrhenian and Ionian coasts of Italy, and eastwards to Turkey and Libya.  This alien species reached the Maltese shores in 2001.  Everywhere, it has formed thriving high-density populations in an amazingly short space of time.  Habitat overlap was noted with the native grapsid Pachygrapsus marmoratus and the pebble crab Eriphia verrucosa.

The Sally Lightfoot Crab tolerates a wide range of water temperatures from 16-31ºC; however, 20-26ºC is preferred.  It inhabits a narrow subtidal zone, commonly at depths of 0 to 2 metres, in rocky habitats where it moves to safety under boulders and in narrow crevices.  It is preyed upon by fish and invertebrates.

Percnon gibbesi is a beautiful crab, easily recognisable by the extremely thin carapace, the long and flattened legs, and the colourful coat, brown with red lines and yellow circles close to the articulations.  Adults have a carapace 30 millimetres wide.  Each of the five pairs of walking legs has a row of spines along the leading edge.  Females carrying eggs have been caught off West Africa between February and April and August; the larvae which hatch from them are planktonic and long-lived, which may contribute to the species‘ invasiveness.

Right now, it seems that this invasion is not creating variations in the ecosystem, maybe thanks to the fact that Percnon gibbesi is decidedly herbivorous, while the largest part of Mediterranean crabs is detritivorous or carnivorous.  So, the new species found a free ecologic space, and it has been able to easily settle down and, in the meanwhile, does not compete with the already present species.

This said, interactions between different species within the ecosystems are complex and rich of implications.  Therefore, it is difficult, if not impossible, to understand the long-term effects of the introduction of such new species which do not create huge immediate variations.

The photo of this Sally Lightfoot Crab was taken at a depth of 4m at Xatt l-Aħmar on Gozo’s south coast.