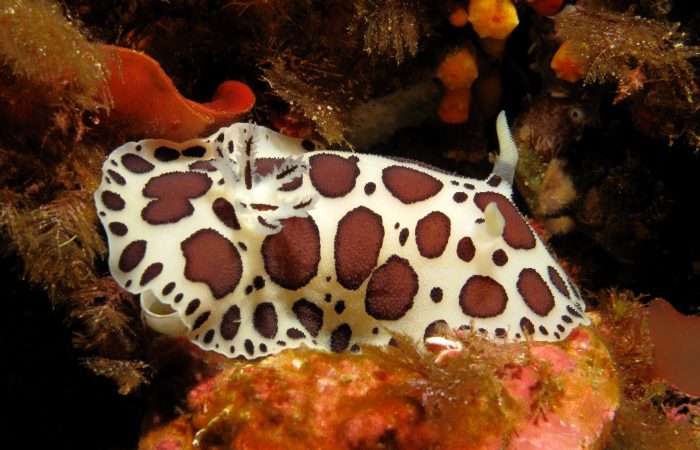 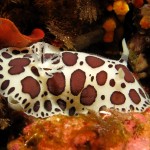 Peltodoris atromaculata is a species of sea-slug, a dorid nudibranch, a marine gastropod mollusc in the family Discodorididae, superfamily Doridoidea, class Gastropoda and phylum Mollusca.

Another scientific name which is sometimes used (although invalid) is Discodoris atromaculata.

Peltodoris atromaculata is especially found in dark and shady underwater areas, in caves, on the walls or ceiling, and can be found at any depth.  It is usually found on the stony sponge Petrosia ficiformis on which it feeds exclusively.

The Dotted Sea-Slug has an oval body and is easily recognised thanks to its dark brown spots on a white background.  These spots are distributed randomly, although the larger and darker ones are generally located on the central portion of the body of the animal.  These spots, clearly visible, probably have the function to signal to potential predators that the animal is not edible (aposematic colouration).

When the animal is resting, the outline of his body is nearly circular and hard to the touch.  The average size is from 5 to 7 cm that can go up to 12 cm.

Peltodoris atromaculata has feather-like gills on the rear part of the body.  It has eight appendages on three branches and is used by the nudibranch to breathe.  It also has two rhinophores on the front part of the body.  These rhinophores are olfactory organs comprising twenty-five lamellae, which increase the surface for receipt of molecules carried in water.  The rhinophores and the gills are white and they are all retracted at the slightest alarm.  When the danger has passed, the rhinophores and the gills slowly emerge.

The Dotted Sea-Slug has long been considered a species endemic to the Mediterranean Sea.  However, it has also been observed on the Basque Coast & the Canary Islands in the nearby Atlantic Ocean.