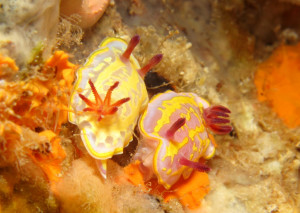 This chromodorid nudibranch is characterised by the lilac-pink to pale blue background colour and by the golden marginal band on the mantle with large white glands on its inner side.  Krohn’s Doris also has a white foot margin and 3 distinct white or yellow longitudinal lines (the median one extends anteriorly between the rhinophores and the lateral ones join behind the gills).  These lines can be broken into dashes or spots in some individuals, and often by some white spots or speckles between the longitudinal lines.  The rhinophores and gills of Felimida krohni are uniformly purple.

The rhinophores are alaminar and semitransparent in the base area while the tip has 12 to 15 carmine coloured lamellae.  There are 5 to 8 carmine/pink coloured gill leaves surrounding the anus.  The gill leaves are narrow and have lamellae on both sides of the spine, alternating large and small lamellae.  Felimida krohni‘s body reaches a length of 28 mm.

Felimida krohni tends to live in dimly lit rocky walls with plenty of sciaphilic algae (Halimeda tuna and Peyssonnelia), hydrarians, bryozoans and sponges.  It has been cited living on sponges such as Hymeniacidon perlevis and Ircinia but it has not been proven yet which species constitutes its food.  The spawn consists of a flattened spiral containing eggs about 90 microns in diameter.

This species was transferred from the genus Chromodoris to the genus Felimida in a revision of the family Chromodorididae using DNA characters which showed that the Atlantic species of Chromodoris formed a distinct clade.  Older unaccepted names include Chromodoris krohni, Chromodoris trilineata and Doris krohni.