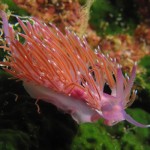 Flabellina pedata is a species of sea slug, an aolid nudibranch, a marine gastropod mollusc in the family Flabellinidae, superfamily Flabellinoidea, class Gastropoda and phylum Mollusca.

This nudibranch is easily recognised by the overall pink-purple coloration of the body and processes. In the Mediterranean it can grow to about 20 mm long, while specimens in the Atlantis Ocean may grow to 50 mm. Opaque white pigment is present on the extremities and as white rings at the tips of the cerata. The digestive gland is usually red in colour, partly masked by the purple hue.

It is structurally similar to other Flabellinids, but distinguished by its purple hue. Flabellina affinis shares this coloration, but has lamellate rhinophores and more pedunculate cerata and is found in the Mediterranean Sea, but not further north.

This species occurs, often solitary or in pairs, in sublittoral areas on hard substrate such as somewhat exposed rocky surfaces.

This sea slug eats Eudendrium (a kind of sparsely-branched, spindly species of Hydrozoa). The spawn is a thin white thread normally wound round the Eudendrium on which the animals are feeding.