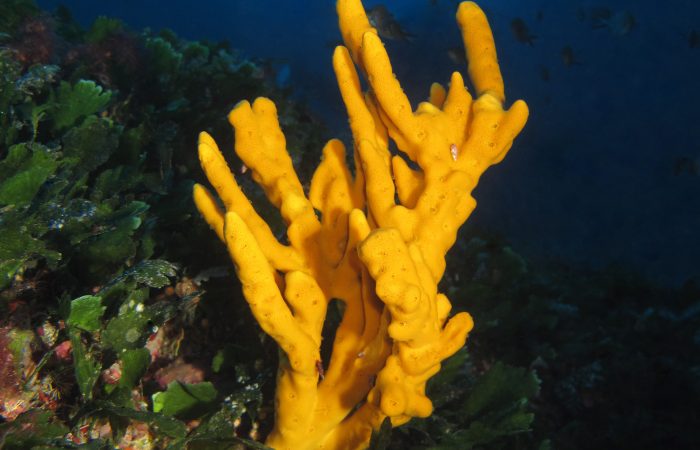 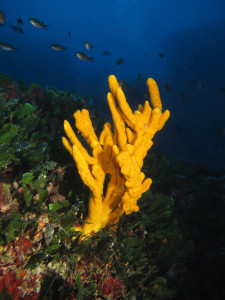 This species occurs in the western Mediterranean Sea, and on the Atlantic coast of Europe and Africa from the Bay of Biscay to Cape Verde and west as far as the Azores.

Like all sponges, the body of Axinella polypoides is formed by a set of cells each having a definite functionality.  The body is hollow, consists of pores or holes and has a cylindrical main shaft, usually erect.  Sponges can form branches or fans which are oval at the end.  In the case of Axinella polypoides the branches are rounded.  Its surface is smooth and has a yellow or orange color.  The body length usually varies between 20 cm and 25 cm.

The Common Antlers Sponge lives on rocky bottoms at depths of 20 to 100 meters.  It can also be found in colder seas like those of northern Europe.  This species can be flexible at the top part but hard at the lower section.

Sponges are formed by pores through which water enters.  The sponge captures the plankton and other nutrients and absorbs the oxygen.  The amount of water which some sponges filter is quite considerable, usually 200,000 times the volume of the animal every 24 hours.

Most sponges are hermaphrodites (each adult can act as either the female or the male in reproduction).  Axinella polypoides can reproduce sexually or asexually.

This photo was taken at a depth of 50m near Double Arch Reef, a natural underwater feature outside Xwejni Bay, to the west of Marsalforn on Gozo’s north coast.