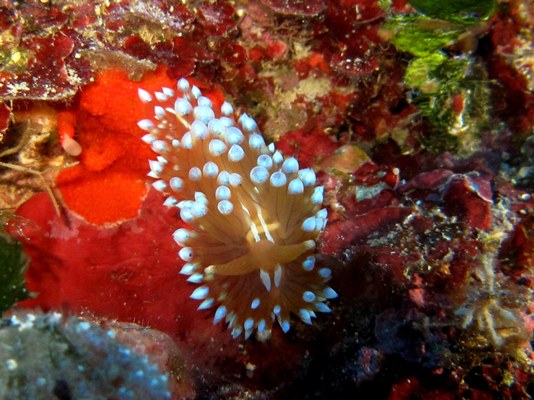 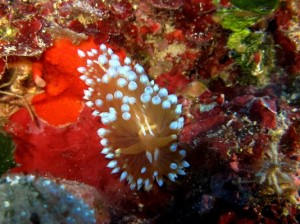 Janolus cristatus is a species of nudibranch, a marine gastropod mollusc in the phylum Mollusca, class Gastropoda and family Proctonotidae.

Crystal Tips is semi-transparent and has an oval-shaped outline.  It is cream or light brown in colour, and grows to approximately 7.5cm in length.  The head has oral tentacles that are short.

The lateral cerata are numerous, have a smooth surface and an inflated appearance.  The central digestive gland lobe is thin and brown in colour and can be seen through each ceras.  These gland lobes divide at the tip of the cerata into numerous terminal branches.  The tips of the cerata are bluish-white and iridescent.

This white colouration that is present on the cerata also appears in patches or lines along the bare central dorsum, as well as around the lamellate rhinophores and on the metapodium.  The rhinophores are joined together at their bases with a swollen and wrinkled accessory caruncle.  Both the rhinophores and median sensory caruncle are somewhat darker in colour than the rest of the body.

Janolus cristatus is found at depths of up to 40 metres, only in calm, clean water, on hard substrata in the sublittoral zone.  The spawn of this species appear as a light pink or white string forming a wavy, circular pattern.  The eggs themselves are contained within packets with transparent patches in between.  This gives them the appearance of beads.

This Crystal Tips nudibranch was found at Reqqa Point, on Gozo’s north coast.