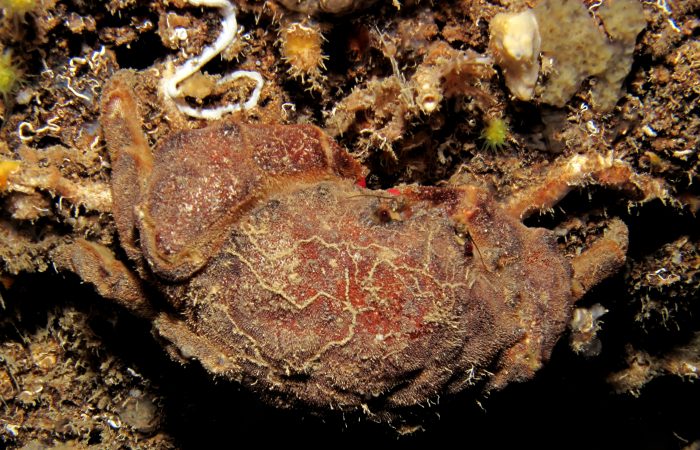 Dromia personata, the Sleepy Crab (a.k.a. Porter Crab or Sponge Crab), is a species of crab found in the North Sea, the seas around Malta in the Mediterranean Sea, and connecting parts of the north-eastern Atlantic Ocean.  Its slow movements are the origin of its name « sleepy ».

The Sleepy Crab is covered with short hairs giving it a felted appearance.  Its pubescence colour is dark brown, whereas the naked tips of its chelipeds’ propodus and dactylus are pale pink or white.  Juveniles have varied colors.

The carapace of Dromia personata is sub-globose, dorsally vaulted.  In males it measures up to 65 mm x 78 mm, compared to the 63mm x 73 mm in females.  Its sub-median lobes are prominent, its median ventrally placed, with the cervical groove prominent.  The first segment of antennal peduncle is freely moveable and the excretory pore conspicuous.  The forehead has three triangular projections.  The antero-lateral edges of the carapace carries five strong teeth, the third obscurely bifid.

The Sleepy Crab’s chelipeds are stout and equal.  The inner surface of the propodus is covered in dense long setae, distally naked.  The fourth and fifth pereiopods are flattened, subdorsal and subchelate.  The female chelipeds are smaller than in the male; the male chelipeds are more robust, with the coxa (basal section) of the fifth pereiopod having a long penis.  The last two pairs of legs are positioned dorsally, and are used by young crabs to hold a sponge in place as camouflage, making it difficult to spot.

Dromia personata lives mainly in caves, from the lower shore to a depth of 8 metres, or occasionally to a maximum depth of 100 metres.  Adults of this species can be observed all year round.

Octopus, starfish and a variety of fish are predators of this crab.  Females are ovigerous in July with late zoeae in September.  There are four planktonic larval stages and one megalope.

The photo of this Sleepy Crab was taken at a depth of 16 metres inside Billingshurst Cave near Reqqa Point on Gozo’s north coast.