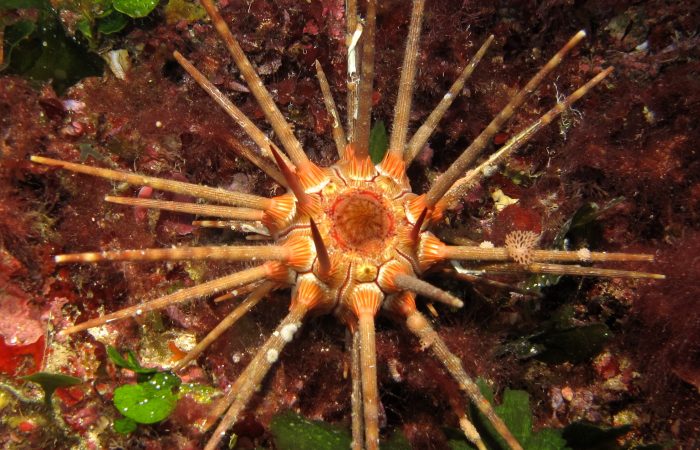 The Slate Pencil Urchin inhabits littoral regions of the Atlantic Ocean.  It has also become an invasive species in some parts of the world including Malta where it has been since 1998.  This was the first record in the Mediterranean Sea and is thought to have been brought there in ballast water.  To this day, it only occurs in the eastern Mediterranean.

Eucidaris tribuloides is a sluggish echinoid that leads a nocturnal, benthic existence.  During daylight hours, the slate pencil urchin uses its large primary spines to anchor itself under or atop rocks or to lodge itself in crevices.  Individuals rarely stray far from their locality.  At night, they will feed primarily on corals and sponges, among other things.

When its development is contrasted to the cidaroid sister subclass Euechinoidea, Eucidaris tribuloides becomes a very interesting organism from the standpoint of developmental and evolutionary biology.  In euechinoid embryonic development, e.g. in the purple sea urchin, the micromeres comprise a set of four small cells that reside at the base of the vegetal plate.  They are a « precociously invaginating lineage », meaning that they move into the blastocoel just prior to gastrulation; these four cells then eventually give rise to the larval skeleton.  Similarly, the Slate Pencil Urchin also possesses a larval skeleton that arises from a special lineage of cells.  In contrast, however, the number and size of its micromeres can vary (from one to three), and they do not precociously invaginate; rather, they ingress during gastrulation and bud off from the tip of the growing archenteron.  Although there are numerous molecular differences between the « spicule-forming cells » of Eucidaris tribuloides and the primary mesencyhme cells of euechinoids, these two cell lineages are thought to be homologous and have been contrasted in developmental evolution research.

This photo was taken at a depth of 15m near Double Arch Reef, a natural underwater feature outside Xwejni Bay, to the west of Marsalforn on Gozo’s north coast.