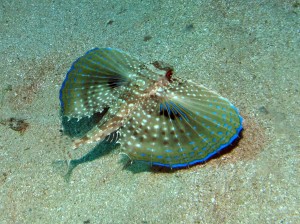 The Flying Gurnards are notable for their greatly enlarged pectoral fins that flare up when the creature is threatened.  They cannot literally fly, but their pelvic fins act as legs as they slowly make their way across the bottom in search of food, mainly crustaceans and other small invertebrates.  They are quite small, only growing to about 40cm in maximum length and live at depths of up to 100 meters.

Like the true gurnards, to which they are related, they possess a swim bladder with two lobes and a ‘drumming muscle’ that can beat against the swim bladder to produce sounds.  This grunting sound is used by the flying gurnards to communicate with one another.

They have heavy, protective scales and large eyes.  When excited, this fish spreads its ‘wings’ (in fact huge pectoral fins), which are semi-transparent but tipped with a beautiful and phosphorescent bright blue coloration, designed to scare away predators.

Although most species live in the Indo-Pacific, at least one is native to the Atlantic Ocean and the Mediterranean Sea.  The adults live on the sea bottom, but many species have an extended larval stage, which floats freely in the oceans.

This photo was taken at Mġarr ix-Xini on Gozo’s south coast.