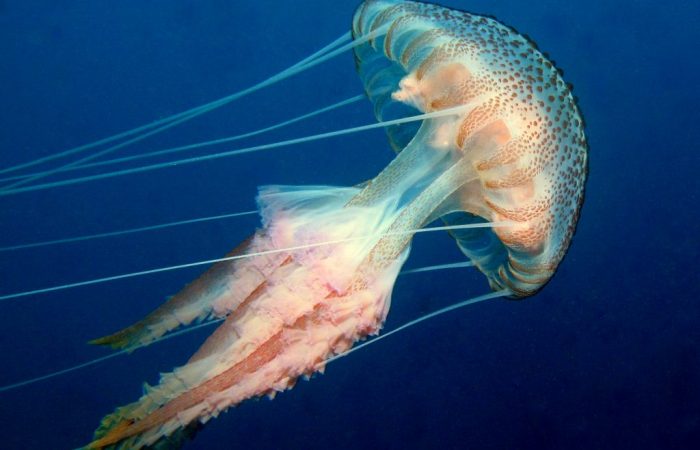 Pelagia noctiluca, the Purple-Striped Jellyfish (also known as the Mauve Stinger) is widely distributed in all warm and temperate waters of the world’s oceans, including the Mediterranean Sea, Red Sea and Atlantic Ocean.  It is also found in the Pacific Ocean, with sightings in warm waters off Hawaii, southern California and Mexico, as well as other Pacific locations.  This is typically an offshore species, although sometimes it is washed near the coastlines and may be stranded in great numbers on beaches.

The genus Pelagia belongs to the family Pelagiidae, order Semaeostomeae, class Scyphozoa, phylum Cnidaria and kingdom Animalia.  In Latin, pelagia means « of the sea », nocti stands for night and luca means light; thus, Pelagia noctiluca can be described as a marine organism with the ability to glow in the dark.

The Purple-Striped Jellyfish may grow to 10 cm in diameter and its body is radially symmetrical.  The medusa colour varies from pale red to mauve-brown or purple and the exumbrella surface is covered in pink or mauve nematocyst-bearing warts.  The mushroom shaped, deep bell has 16 marginal lobes, eight marginal sense organs and eight, hair-like marginal tentacles.  These thin tentacles may extend as far as 3m.  All tentacles on Pelagia noctiluca are covered in nematocysts.  The manubrium bears four thick, frilled oral arms that are the primary feeding surface.  Pelagia noctiluca feed mainly on pelagic ascidians and other small jellyfish.

There is only one body cavity known as the gastrovascular cavity.  This is a primitive gut or digestive cavity with only one opening that is used for ingestion and excretion.  Being radially symmetrical it has no head and thus no centralized nervous system.  The nervous system present is primitive, consisting of a simple net composed of naked and largely non-polar neurons.  In addition, Pelagica noctiluca also lacks a gaseous exchange, excretory and circulatory system.  However cnidaria have evolved cnidae, cells which serve for a variety of functions that include prey capture, defense, locomotion and attachment.  When fully formed cnidae are called cnidocytes.  When stimulated the cnidae secrete nematocyst toxins that are biological poisons.  Although the sting of Pelagia noctiluca is potent and painful, it is limited in time and extent.

Movement is caused when the medusa pulsates, as the marginal tentacles are contracted, straightened and stiffened. Pulsation was found to be optimal between 8° to 26°C.  Movement is only restricted vertically and thus Pelagia noctiluca are carried in large swarms by currents.  Pelagia noctiluca are bioluminescent, i.e. have an ability to produce light.  Light is emitted in the form of flashes when the medusa is stimulated by turbulence created by waves or by a ship’s motion.  This flashing is only of relatively short duration and gradually fades.

This species reproduces sexually.  Four gonads arise as elongated endodermal proliferations, developing into ribbon-like folds in the interradial sectors of the stomach wall slightly distal to the rows of gastric filaments.  Male and female gonads vary only slightly and the main difference is the thickness of the follicle.  In Mediterranean Sea specimens eggs are laid between 12pm and 2pm in December.  After 3 days the egg develops in a planula; at this stage movement is only done by ciliary action.  After 7 days, planulae develop into ephyra which develop into young medusa after a month.

The photo of this Purple-Striped Jellyfish was taken at a depth of 20m in front of Billingshurst Cave near Reqqa Point on Gozo’s north coast.