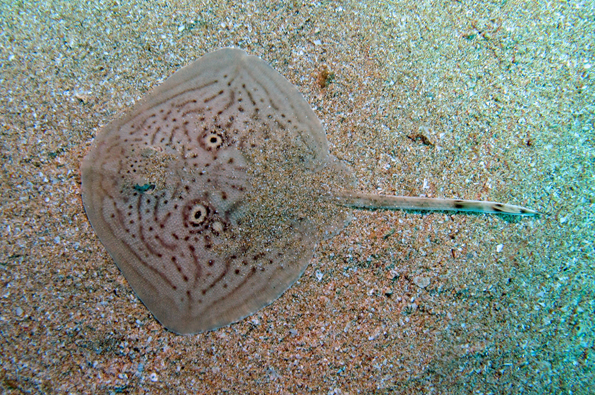 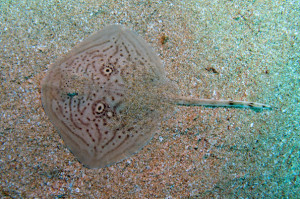 Raja is a genus of skates containing nearly 30 species. They are flat-bodied, cartilaginous fish with a rhombic shape due to their large pectoral fins extending from or nearly from the snouts to the bases of their tails. Their sharp snouts are produced by a cranial projection of rostral cartilage. The mouth and gills are located on underside of the body. They may be either solid-coloured or patterned, and most skates have spiny or thorn-like structures on the upper surface.

Skates and related species have fossil records dating from the Upper Cretaceous period, thus this well adapted species is quite ancient.

The Rough Skate (above photo, also known as the Four-Eye Ray) has eye-spots on either side of the mid-line of the body having brown centres, surrounded by concentric rings of yellow bounded by brown. The rest of the back is yellowish-grey marked with grey spots and streaks. The underside is nearly white.

Raja radula occurs throughout the Mediterranean Sea, mainly in the western part. It is found from coastal waters to depths of about 300m and feeds on all kinds of bottom animals.

Like all skates, reproduction is oviparous. About 80 to 154 paired eggs are laid per skate, per year. Egg-cases measure 5.1 to 5.7cm and are laid throughout the year, mainly in spring and summer. Eggs are oblong capsules with stiff pointed horns at the corners, commonly known as mermaid’s purses. These are deposited in sandy or muddy flats and embryos develop in about four months. Females mature at 34cm and males at 30cm. The maximum length is 70cm.

This photo was taken at a depth of 10m at Mgarr ix-Xini on Gozo’s south coast.