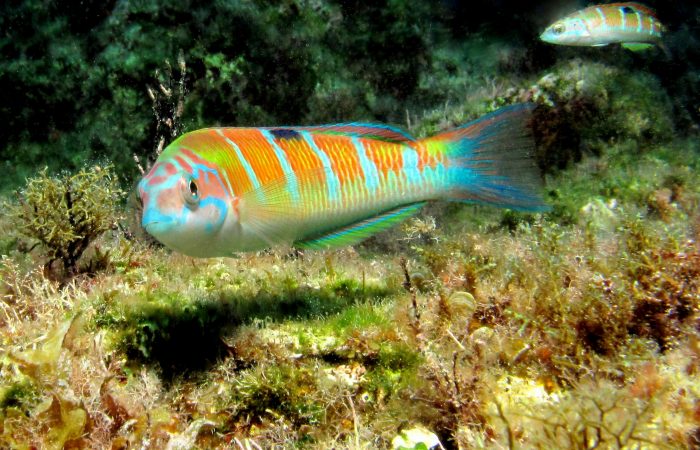 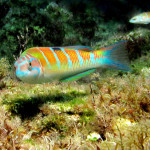 The Ornate Wrasse, Thalassoma pavo, is a species of wrasse native to the eastern Atlantic Ocean from Portugal to Gabon and the oceanic islands and is found throughout most of the Mediterranean Sea, except for parts of the northern coasts of the western Mediterranean and the Adriatic Sea. It is however found in the Ligurian Sea and the Sea of Sardinia.

It can reach 25 cm in length, though most do not exceed 20 cm. Thalassoma pavo feeds on small molluscs and crustaceans. The juveniles of this species often clean other fishes.

The Ornate Wrasse inhabits coastal waters near rocks and seagrass beds at depths from 1 m to 150 m, though rarely below 50 m. It is also often found near man-made structures such as shipwrecks and jetties, etc…. It is either gregarious, being found in small groups or forming larger aggregations in loose shoals, in association with the two types of mating system, territorial haremic or group spawning, respectively.

This species is a protogynous hermaphrodite, with distinct sexual dichromatism. It spawns in spring, and the eggs and larvae are planktonic.

This photo was taken at a depth of 5 m at Reqqa Point on Gozo’s north coast.