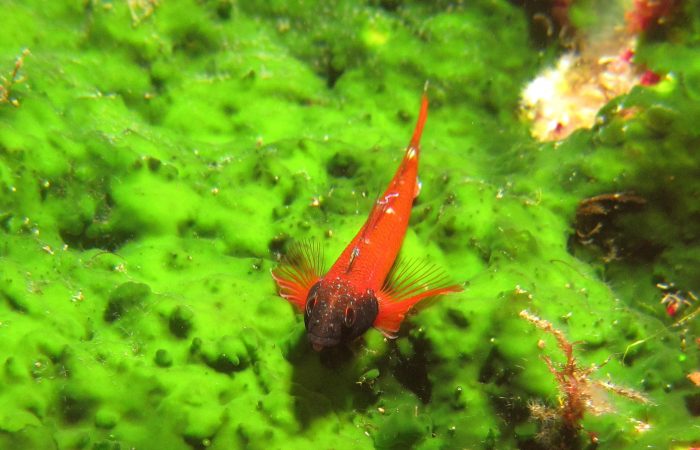 Tripterygion tripteronotum, the Red-Black Triplefin, is a blennioid, a small perciform marine fish in the family Tripterygiidae, the threefin blennies.  It is endemic to the Black Sea and the Mediterranean Sea.  The family name derives from the Greek tripteros meaning « with three wings ».

Many threefin blennies are brightly coloured, often for reasons of camouflage; these species are popular in the aquarium hobby.  As demersal fish, threefin blennies spend most of their time on or near the bottom on coral and rocks.  The fish are typically found in shallow, clear waters with sun exposure, such as lagoons and seaward reefs, hardly ever deeper than five metres; nervous fish, they retreat to rock crevices at any perceived threat.

Threefin blennies are diurnal and territorial; many species exhibit sexual dichromatism, with the females drab (dull coloured) compared to the males.  The second dorsal fin is also extended in the males of some species.  Small benthic invertebrates comprise the bulk of the threefin blenny diet.

The photo of this Red-Black Triplefin was taken at a depth of 6m inside the Blue Hole, a natural feature at Dwejra on Gozo’s west coast.