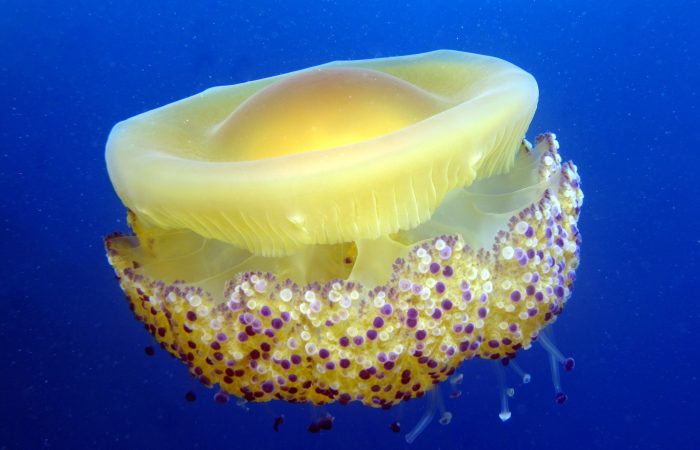 Cotylorhiza tuberculata is a species of jellyfish, also known as the Fried Egg Jellyfish or Mediterranean Jelly.  It is commonly found in aggregations in the Mediterranean Sea, Aegean Sea and Adriatic Sea.  The scientific name Cotylorhiza is derived from the Greek words “κοντύλι,” meaning cup, and “ρίζα,” meaning root.

A typical adult Fried Egg Jellyfish measures 35 cm in diameter, though they can reach 50 cm across.  The smooth, elevated dome of this elegant creature is surrounded by a gutter-like ring. The marginal lappets are elongated and sub-rectangular.  Each mouth-arm bifurcates near its base and branches several times.  In addition to some larger appendages there are many short, club-shaped ones that bear disk-like ends.

These jellies primarily feed on zooplankton and reproduce asexually.  Larvae attach themselves to a hard ocean surface and grow in a polyp colony that looks like a stack of saucers.  The tiny babies are then released from capsules, like spaceships and drift away.

With their alien-like appearance, jellyfish are notorious for their stinging nature and often dreaded by humans and other sea creatures alike.  But the Cotylorhiza tuberculata touch is relatively harmless to both humans as well as the juvenile mackerel fish which dart in and out of the jelly mass.  In fact, the Fried Egg Jellyfish is a floating safe house for the juvenile mackerel while it moves around with the planktonic drift.

Little is known about what leads to population explosions of jellyfish, but researchers attribute this phenomenon to favourable circumstances in the ecosystem.  When the conditions are right there is a bloom.  The sight of a medusa swarm can be breathtaking, as these docile creatures float graciously onward.  Whenever there happens such a year with huge populations of jellyfish in general, swimmers and divers alike get concerned, such as what happened around the Maltese Islands two years ago.  However, the following year there was almost nothing.  Most Cotylorhiza tuberculata blooms around Gozo happen during the month of September.

One of Cotylorhiza tuberculata‘s natural predators is the sea turtle Caretta caretta.  Luckily, the Fried Egg Jellyfish is not in immediate danger of disappearance, unlike the Caretta caretta.  Yet, they are still important in the balance of sea life, as all these components are interconnected.  In an optimal ecosystem, the system is even more stable with more biodiversity.

The photo of this Fried Egg Jellyfish was taken at a depth of 5m at Reqqa Point on Gozo’s north coast.