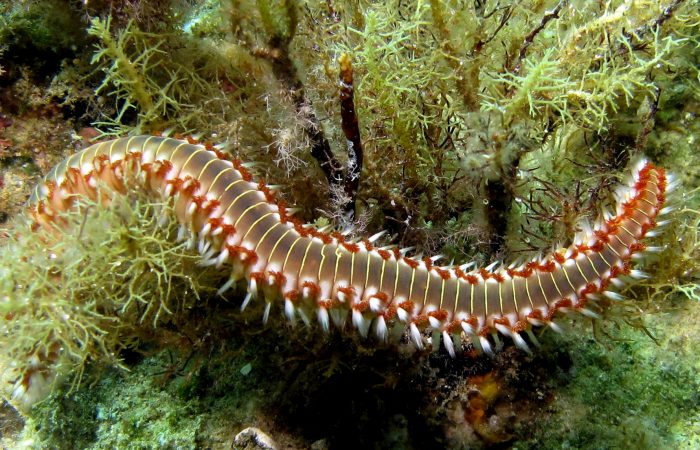 Hermodice carunculata, the Bearded Fireworm, is a type of marine bristleworm native to the tropical Atlantic Ocean and the Mediterranean Sea.

Bearded Fireworms are usually 15 centimetres in average length, but can reach up to 30 centimetres.  It is found in many marine living environments such as corals, rocks, mud, sand, posidonia, and on drifting wood as well as port infrastructure in shallow water from the surface to 50 meters deep.

At first glance, a Bearded Fireworm looks like a centipede with its elongated and flattened appearance, multiple segments, white silks, and parapodia and gills located on the side of its body.  Its colours are varied and range from greenish, to yellowish, to reddish, greyish through white with a pearly glow.  The body consists of 60 to 150 identical segments separated from each other by a thin white line and protected by cuticles.  Each segment has a pair of parapodia, a structure for locomotion, clusters of stinging white bristles, and red or orange gills all in bilateral position.  The anterior part of the worm can be recognized by small growths, called caruncle, which have the same colour of the gills on the first four segments.  The mouth is ventral and is located on the second segment.  The head is shown on the first segment and includes the eyes and other sensory organs.

Hermodice carunculata is a voracious predator and feeds on dead or decaying organisms and coral polyps.  It is a slow creature, and is not considered a threat to humans unless touched by a careless diver or swimmer.

The bristles, when flared, can penetrate human skin, injecting a powerful neurotoxin and producing intense irritation and a painful burning sensation around the area of contact.  The sting can also lead to nausea and dizziness.  This sensation lasts up to a few hours, but a painful tingling can continue to be felt around the area of contact.  In a case of accidental contact, application and removal of adhesive tape will help remove the spines; applying isopropanol to the area may help alleviate the pain.

The photo of this Bearded Fireworm was taken at a depth of 8m in Xwejni Bay on Gozo’s north coast.