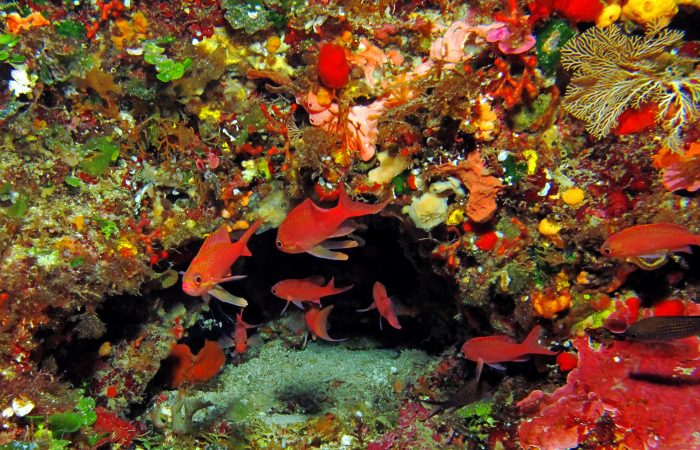 Anthias anthias, the Swallowtail Seaperch, is a colourful marine fish found in the Mediterranean Sea and the eastern Atlantic Ocean.

The Swallowtail Seaperch lives at a depth ranging from 15 to 200 metres, amongst rocks and corals where it remains hidden in caves and crevices during the day.  It is a nocturnal fish, leaving only at night to feed on zooplankton, small crustaceans and tiny fish.  It has an interesting feature: they are all hermaphrodites, born females and, possibly at some point in their lives, they can turn into males.

Generally, when the male dies, the largest female changes her sex to become a male.  It is a gregarious species that travels in groups.  These groups mainly comprise females with a single male, recognizable by his fins which are larger than the females’.

The Swallowtail Seaperch can grow to a maximum length of 27 centimetres, although it usually measures from 12 to 18 centimetres.  Its body is rather deep, generally its length being 2½ times its depth.  As an example, if a Swallowtail Seaperch is 6 centimetres deep, then its length is expected to be 15 centimetres.  The pelvic fins are much longer than the pectoral fins.  The caudal fin has acute lobes, the lower being longer than the upper.  The lateral line is complete, ending at the base of the caudal fin.  The scales are rather large, counting 36 to 39 in the lateral line.

Anthias anthias vary from pink to red in colour, with 3 yellow lines on each side of the head.  Quite often, one can also spot brown blotches on the back.  It is also easily recognized by the pelvic fins, which are developed and yellow in colour, which in males turn red during the reproduction season.

Mating takes place from June to October.  The male marks his territory, whose surface he cleans for the females to come and lay their sticky eggs.  The male then cares for the eggs, providing them with ventilation.

The photo of this group of Swallowtail Seaperches was taken at a depth of 40m outside of the Blue Hole, a natural feature at Dwejra, not far from the popular Inland Sea, on Gozo’s west coast.