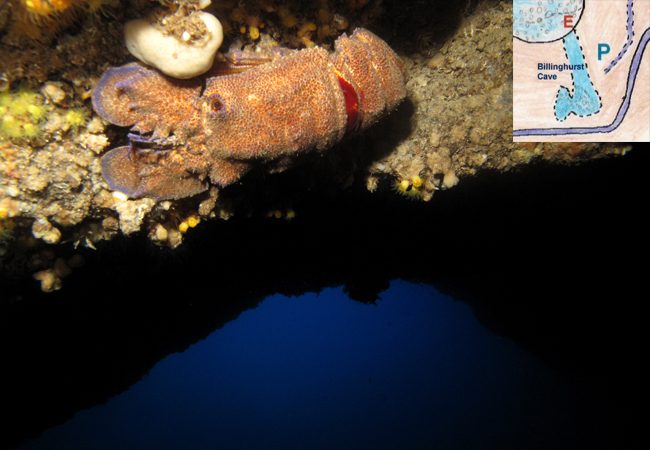 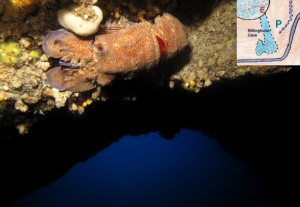 Billingshurst Cave is located in a tight corner of a rocky coastline on Gozo’s North coast.  Facing due north, it sees almost no direct sunlight, thus having very little natural light penetration.  The insert on the top right of the photo shows an illustration of this cave.

After diving for about 60m into the cave over a bottom of fine sand and shingle, several loose boulders form an upwards slope leading to second massive cave.  Here we are able to surface in a large air pocket totally enclosed in rock.  The ceiling of this cave is about 5m above the water level while the furthest walls are approximately 35m away.  The sight of the blue open water with the sun shining through from the outer reef on the way out of this cavern is quite impressive.

The above photo shows the exit of Billingshurst Cave with a Slipper Lobster clinging to the ceiling.  This lobster is also known as a Spanish Lobster and as a Locust Lobster besides its Latin name Scyllarides latus.  It can grow to a total body length of about 45 centimetres, although rarely more than 30 cm.  Scyllarides latus lives on rocky or sandy substrates at depths of 4–100 metres.  They shelter during the day in natural dens, on the ceilings of caves or in reefs, preferring situations with more than one entrance or exit.  The diet of S. latus consists generally of molluscs.  The preferred prey are limpets and bivalves.

Slipper lobsters have six segments in their heads and eight segments in the thorax, which are collectively covered in a thick carapace.  The six segments of the abdomen each bear a pair of pleopods, while the thoracic appendages are either walking legs or maxillipeds.  The head segments bear various mouthparts and two pairs of antennae.  The first antennae, or antennules, are held on a long flexible stalk, and are used for sensing the environment.  The second antennae are the slipper lobsters’ most conspicuous feature, as they are expanded and flattened into large plates that extend horizontally forward from the animal’s head.