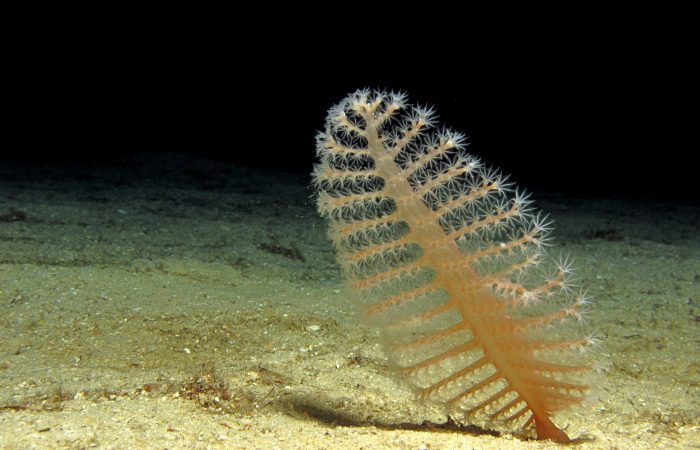 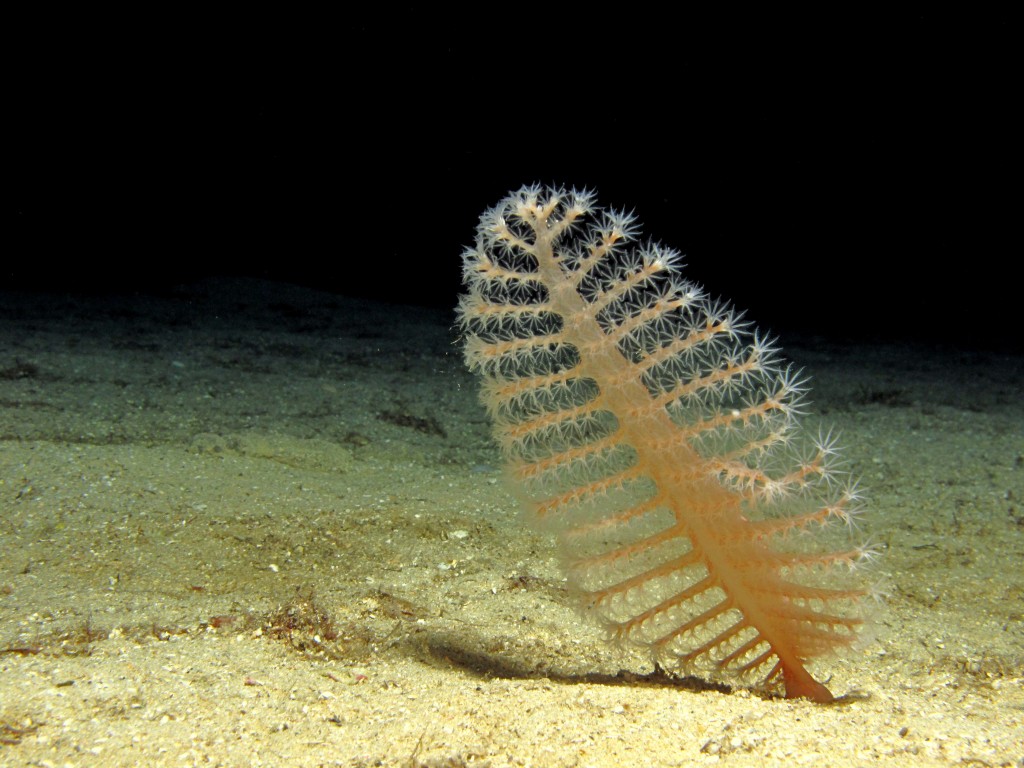 There are 16 families within the order Pennatulacea; they are thought to have a cosmopolitan distribution in tropical and temperate waters worldwide. Sea pens are grouped with the octocorals (soft corals), together with sea whips or gorgonians.

Although named after their feather-like appearance reminiscent of antique quill pens, only sea pen species belonging to the suborder Subselliflorae live up to the comparison. Those belonging to the much larger suborder Sessiliflorae lack feathery structures and grow in club-like or radiating forms. The latter suborder includes what are commonly known as sea pansies.

The earliest accepted fossils are known from the Cambrian-aged Burgess Shale.

As octocorals, sea pens are colonial animals with multiple polyps (which look somewhat like miniature sea anemones), each with eight tentacles. Unlike other octocorals, however, a sea pen’s polyps are specialized to specific functions: a single polyp develops into a rigid, erect stalk (the rachis) and loses its tentacles, forming a bulbous ‘root’ or peduncle at its base. The other polyps branch out from this central stalk, forming water intake structures (siphonozooids), feeding structures (autozooids) with nematocysts, and reproductive structures. The entire colony is fortified by calcium carbonate in the form of spicules and a central axial rod.

Using their root-like peduncles to anchor themselves in sandy or muddy substrate, the exposed portion of sea pens may rise up to 2 metres in some species, such as the tall sea pen (Funiculina quadrangularis). The species has previously been recorded from 50 to more than 200 m depth in the Western Mediterranean Sea and in the Atlantic Ocean from Scandinavia to the Canary Islands.

While generally sessile animals, sea pens are able to relocate and re-anchor themselves if need be. They position themselves favourably in the path of currents, ensuring a steady flow of plankton, the sea pens’ chief source of food. Their primary predators are nudibranchs and sea stars, some of which feed exclusively on sea pens. When touched, sea pens emit a bright greenish light; this is known as bioluminescence. They may also force water out of themselves as a defensive act, deflating and retreating into their peduncle.

Like other anthozoans, sea pens reproduce by co-ordinating a release of sperm and eggs into the water column; this may occur seasonally or throughout the year. Fertilized eggs develop into larvae called planulae which drift freely for about a week before settling on the substrate. Mature sea pens provide shelter for other animals, such as juvenile fish. Analysis of rachis growth rings indicates sea pens may live for 100 years or more, if the rings are indeed annual in nature.

This photo was taken at a depth of 83m at Reqqa Point on Gozo’s north coast.