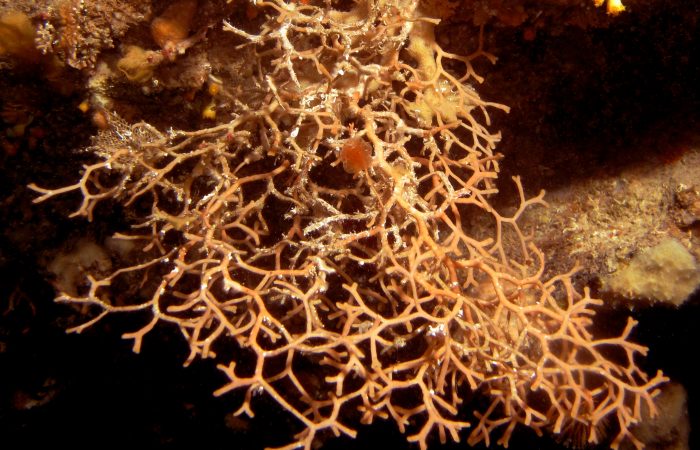 Smittina cervicornis, known as Staghorn Rose Coral, is one of the oldest known species of Bryozoan.  This narrow-branched adeoniform ascophoran is distributed in the Atlantic Ocean from Brittany to the south-east African region and throughout the Mediterranean Sea.

Bryozoans, or Ectoprocta, are a phylum of small aquatic animals living in colonies.  The colonies usually have a skeleton of calcium carbonate.  Bryozoans have a long fossil history.  Fossil records of Smittina cervicornis include Miocene, Pliocene and Pleistocene of Europe and North Africa.

All members of the phylum Bryozoa are hermaphroditic.  Both fertilization and egg brooding may either be internal or external.  In their life-style they resemble the polyps which form coral.  Bryozoa are known informally as moss animals or sea mats.  They generally like warm, tropical waters but live all over the world.

The Staghorn Rose Coral consists of rounded or somewhat flattened branches that are divided in one plane only to form fan-like structures.  These are arranged in several rows behind each other, giving the whole colony a bushy appearance.  The colony is erect, rigid and up to 10 – 15 cm in height.  The colouring is orange or pale orange.

The Staghorn Rose Coral colonies have abundant branches, branching pattern by bifurcation.  The branches are bilaminar, flat-sectioned, with up to 12 lineal series of zooids by layer, the widest point just before the bifurcations.

In old parts of the colony, the frontal budding occurs after secondary calcification of the first layer.  Frontal budding gives successive layers, with the zooids disposed irregularly.  Autozooids are quadrangular, hexagonal or irregular in shape in successive frontal layers.  These are separated by sutures between slightly raised thin ridges.  The frontal shield umbonuloid is flat or lightly convex.

One can observe large frontal pores along the frontal surface of Smittina cervicornis, these pores being larger in the central area. The primary orifice is semi-circular, with a short, broad lyrula in the proximal border.  These have no spines.  The secondary orifice is very variable, depending on the degree of secondary calcification and frontal budding.  Initially the orifice is keyhole-shaped, with a larger distal section corresponding to the primary orifice, and a smaller proximal area, where the suboral avicularium is supported.

As the calcification increases, the secondary orifice grows as a peristome.  This happens initially with a proximal channel toward the avicularium.  However, this quickly forms a thickly calcified cylindrical shaped peristome projecting from the colony surface.  In heavily calcified colonies, only a perfectly round orifice persists, with circular growing marks.

The photo of this Staghorn Rose Coral was taken at a depth of 20m inside Coral Cave on Gozo’s west coast.