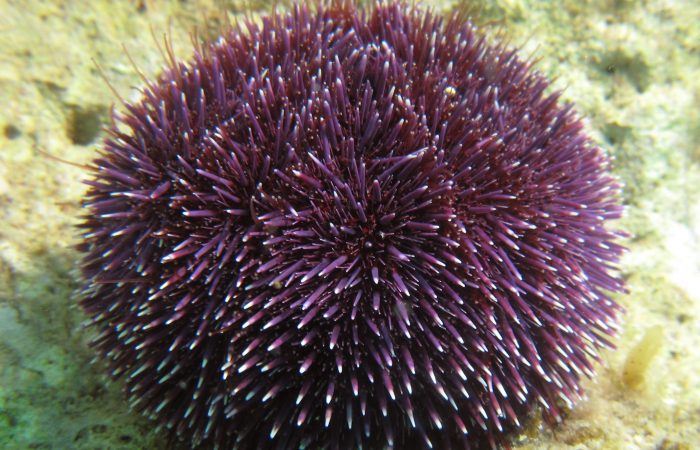 Sphaerechinus granularis, the Violet Sea Urchin (a.k.a. Purple Sea Urchin), is a species of sea urchin in the order Camarodonta.  Its range includes the Mediterranean Sea and eastern Atlantic Ocean.  The fossil record shows that camarodonts have been in existence since the Lower Cretaceous.

Sphaerechinus granularis is a large sea urchin, somewhat flattened dorsally and growing to fifteen centimetres in diameter.  There are two distinct colour forms.  The test is purple in both but one has purple spines and the other white.  Quite often, as these photos demonstrate, Sphaerechinus granularis has purple spines with white tips.  The spines are short and blunt, all the same length, and arranged neatly in rows.

The Violet Sea Urchin favours sheltered locations and lives on rocks covered with seaweed or gravelly substrates.  It is usually found in the neritic zone down to about thirty metres but occasionally down to a hundred metres in more exposed locations.  It is also found in meadows of the seagrass Posidonia oceanica.

Between its spines, Sphaerechinus granularis has tube feet with suction cups and the minute claw-like structures known as pedicellaria.  These are used to cover itself with morsels of algae and shell fragments for camouflage and to protect itself from predators.

It grazes on algae, especially encrusting coralline algae, seagrass blades and their epiphytic organisms and detritus.

Spawning takes place at any time of the year, but the peak period is spring and early summer.  Eggs and sperm are liberated into the water column, where fertilisation takes place.  The larvae are planktonic.  After several moults, the echinopluteus larva settles and undergoes metamorphosis before developing into a juvenile Violet Sea Urchin.

In the Mediterranean Sea, Sphaerechinus granularis is found living in association with two other species of sea urchins, Centrostephanus longispinus and Paracentrotus lividus.  It is preyed upon by the starfish Marthasterias glacialis and Luidia ciliaris.

The photo of this Violet Sea Urchin was taken at a depth of 7 metres at Ras il-Ħobż on Gozo’s south coast.