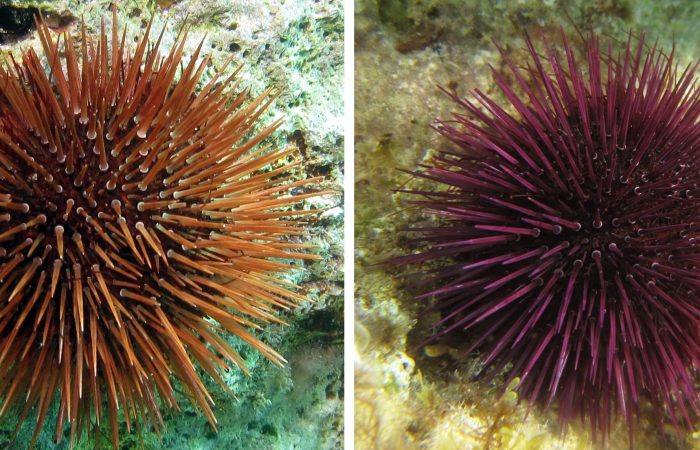 Paracentrotus lividus, the Purple Sea Urchin, is a type of sea urchin which occurs in the Mediterranean Sea and the eastern Atlantic Ocean.  It is most common in the western Mediterranean, where the water temperature in winter varies between 10 and 15°C.

Paracentrotus lividus has a circular, flattened greenish test (derived from the Latin word testa, meaning rounded bowl, amphora or bottle) with a diameter of up to seven centimetres.  The test is densely clothed in long and sharply pointed spines that are usually purple but are occasionally other colours including dark brown, light brown and olive green.  There are five or six pairs of pores on each ambulacral plate.  The tube feet are in groups of 5 or 6, arranged in small arcs.

and sometimes also in rock pools.  It is found on rocks and boulders, and in seagrass meadows of Zostera marina and Posidonia oceanica.  Although Cymodocea nodosa is a preferred food item, it is seldom found in meadows of this seagrass, perhaps because the shifting sand substrate does not suit it or because of pressure from predators.  In fact it avoids soft substrates and can sometimes be found clustered on stones or shell ‘islands’ surrounded by sand.

In shallow or exposed waters, it can use its mouth and spines to dig into soft rocks to create cavities into which it returns and in which it exactly fits.  Where the urchins are numerous, the rock may be honeycombed by these excavations.  Smaller individuals particularly use these retreats, which provide some protection from predators.  In lagoons and rock pools, individuals are smaller than they are in the open sea.

Paracentrotus lividus is unable to tolerate low salinity.  In fact, after exceptional quantities of rain fall, there tends to be mass mortality of urchins in shallow coastal waters.  There are wide swings in population densities over its range, which have not been completely explained.

Individual Paracentrotus lividus are either male or female, although hermaphroditism has been observed.  They aggregate for spawning and release gametes into the water column.  The larvae form part of the zooplankton for about 28 days before settling and undergoing metamorphosis.

The Purple Sea Urchin eats a range of red, green and brown algae in addition to seagrass.  The benthic community is much affected by the number of urchins and their food preferences.  Where they are numerous, they tend to be surrounded by ‘barren ground’ colonised by encrusting Corallinaceae species and characterised by a low biomass of primary producers with a small number of associated species.  Where numbers are low, there tend to be forests of Laminaria and Cystoseira and a much richer, three-dimensional community. The barren grounds can persist for years, though whether this is due to overgrazing by urchins or prevention of recruitment of multicellular photosynthetic organisms by encrusting algae is unclear.

The main predators on Paracentrotus lividus in the Mediterranean Sea are the spider crab (Maja crispata), the fish Diplodus sargus, Diplodus vulgaris, Labrus merula and Coris julis and the gastropod Hexaplex trunculus.  Predation is dependent on size; juvenile urchins are more vulnerable as their spines are less formidable.  In most locations the urchins are nocturnal feeders, but where predators are more active at night the urchins may feed during day instead.

The gonads are considered a delicacy in Malta, France, Italy, Spain and parts of Croatia.

Both photos of these two Purple Sea Urchins were taken at a depth of 5m at Ras il-Ħobż, on Gozo’s south coast.