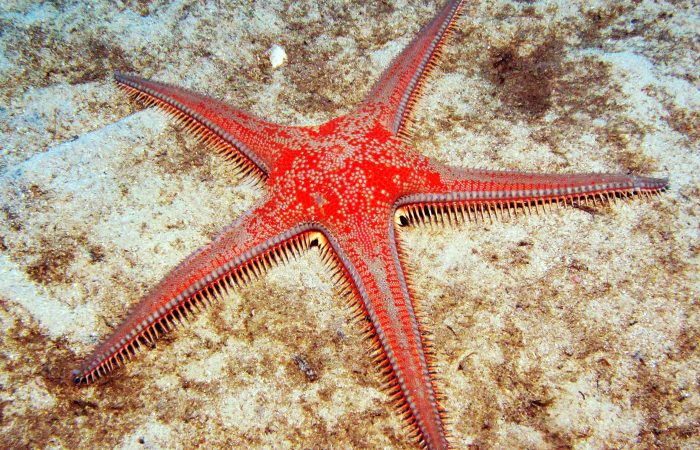 Astropecten aranciacus, the Red Comb Starfish, is a type of sea star and is native to the Mediterranean Sea and the eastern Atlantic Ocean.

Astropecten aranciacus lives very near the coast, and at low tide it buries itself in the sand, showing only the centre of its upper side which is swollen in the form of a cone.  This cone acts like a sense organ.  When it is touched, the cone contracts and the starfish buries itself on the sand again.  Then at high tide, the starfish reappears on the sandy bottom.  It buries itself in the sand to shield parts of its body from the rays of the sun, especially the bottom surface which has no coloured pigment and is therefore particularly sensitive.

The Red Comb Starfish has superomarginal plates equipped with 1 to 3 small spines and inferomarginal plates with long, pointed, strong, regularly arranged spines.  The inferomarginal spines have reddish-orange colour at the base and yellowish or white colour towards the tip.  It is rugged with normal size disc and pointed arms.  The colour of the aboral side is given by a succession of paxillae (from the top they look like round points) with upper extremity red-orange in various combinations with paxillae with upper extremity grey or beige.  The superomarginal plates are usually grey or beige homogeneous.  This is the largest species of Astropecten in the Mediterranean Sea, with a maximum diameter of 55 centimetres, although it usually measures about 30 cm.

Astropecten aranciacus is a starfish with a lot of features and can be distinguished easily from the other species by colour and size.  Sometimes it is confused with Astropecten irregularis (Sand Sea Star).

The Red Comb Starfish lives on sandy, muddy or gravel bottoms at depths of 2 to 100 metres.  This species is active and easy to find in the late afternoon and during the night.

This sea star is a carnivore and feeds on molluscs, which it catches with its arms and then takes to the mouth.  The prey is then trapped by the long, moving prickles around the mouth cavity.

The photo of this Red Comb Starfish was taken at a depth of 37m at Il-Kantra, on Gozo’s south coast.