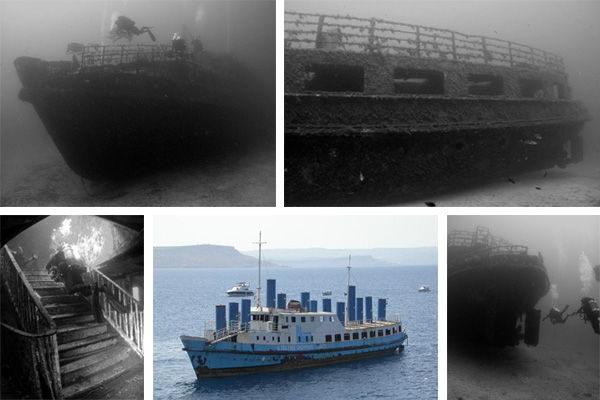 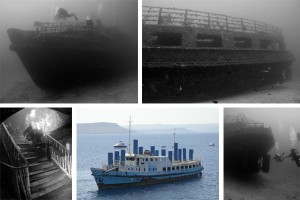 The M/S Frisia II was launched in 1957 and then renamed Nordpaloma in 1977.  She was renamed again MV Karwela when brought to Malta in 1986.

On the Maltese Islands she sailed as a tourist ferry boat for Comino Marina Ltd until it was decommissioned in 2002.  The MV Karwela ferry measures 50.31 metres by 8.50 metres and was designed to carry 863 passengers.

The MV Karwela was scuttled as an artificial reef for scuba divers at Xatt L-Aħmar, on Gozo’s south coast on the 12th August 2006.  This wreck stands perfectly upright on a sandy sea bottom.  The bow lies at a depth of 39 metres whereas the stern rests at a depth of 41m.  The top deck is 31 metres deep.

This wreck is easily dived from the shore at Xatt l-Aħmar.  Directly underneath the entry and exit points, there is a plateau which varies in depth from 3 metres to 8 metres.  This plateau is around 30 metres wide and ends at a sheer drop-off.  The bow of the MV Karwela is located approximately 40 metres away from this drop-off.

While there is plenty to explore inside on its three decks, the hull and the superstructure are home to several marine species, most especially a variety of nudibranchs.  The close-by reef offers an excellent way to continue the dive, gradually ascending along the wall and then making an interesting safety/decompresion stop on the plateau above.

These photos were taken at Xatt l-Aħmar on Gozo’s south coast.