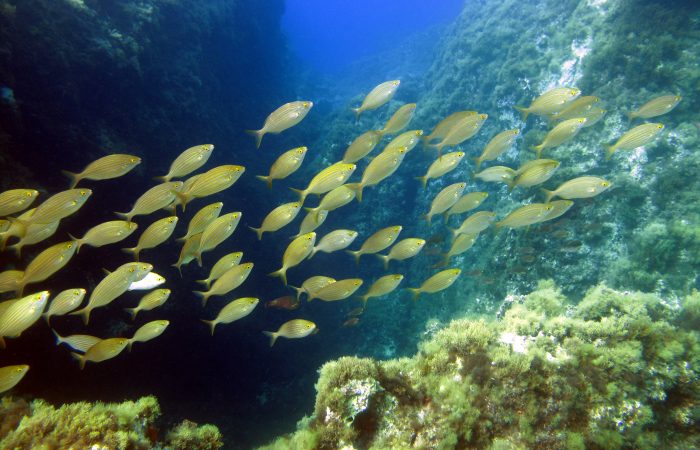 Sarpa salpa, the Salema Porgy (a.k.a. Dreamfish, Salema, Cow Bream or Goldline) is a type of bony fish, a species of sea bream belonging to the family of porgies.  It inhabits the temperate and tropical waters of the Eastern Atlantic Ocean, where it ranges from the Bay of Biscay to South Africa, as well as the Mediterranean Sea and the thus the Maltese Islands.  It has also occasionally been found as far north as Great Britain.

The Salema Porgy, while seeming to be a normal fish, when ingested, it may cause hallucinogenic effects known as ichthyoallyeinotoxic.  This type of food poisoning can manifest itself with vivid auditory and visual hallucinations, delirium, disturbances in motor coordination, nausea, nightmares, vertigo, and other disturbances to the central nervous system.

These LSD-like hallucinations were known to the Ancient Romans, where it was consumed as a recreational drug.  It was also used ceremoniously among Polynesians.  In Arabic, the Salema Porgy are literally called “the fish that make dreams”.

Sarpa salpa is a strictly littoral species that is found from the surface up to (quite rarely) a depth of 70 metres.  In fact, it normally does not exceed depths of 20 metres and is mostly found in very shallow waters.  It populates rocky bottoms with growth of aquatic plants and meadows of Posidonia oceanica.

The Salema Porgy body has the typical shape of the porgies; that is flattened at the sides, with the back and belly convex in the same way.  The caudal peduncle is thin, whereas the caudal fin is forked and with pointed lobes.  The eyes are quite small.  The mouth is tiny, located at the apex of the snout and curved slightly downwards.  It is equipped with pointed teeth used to scrape the algae from the rocks.

The coloration of Salema Porgy is silver with a grey-blue back, its silver sides crossed horizontally by 10 to 12 thin golden stripes.  A dark speck is present at the junction of the pectoral fins.  The eyes are golden.  The tail and fins are greenish blue except for the ventral fins which are transparent.

Sarpa salpa is a gregarious species that forms dense, numerous and well-disciplined schools that move quickly among the rocks.  This fish has a very powerful swim that produces a vibration which can sometimes be felt by divers.

The Salema Porgy is a mainly herbivorous fish.  It particularly prefers the green algae Ulva lactuca.  When still juvenile, it feeds mainly on annelids, crustaceans and other invertebrates.

A protandric hermaphrodite, Sarpa salpa is born male and then becomes a female during growth.  Eggs are generally laid during autumn.

The photo of these Salema Porgy was taken at a depth of 8m in Dwejra, on the shallow reef between the Blue Hole and Coral Cave on Gozo’s west coast.