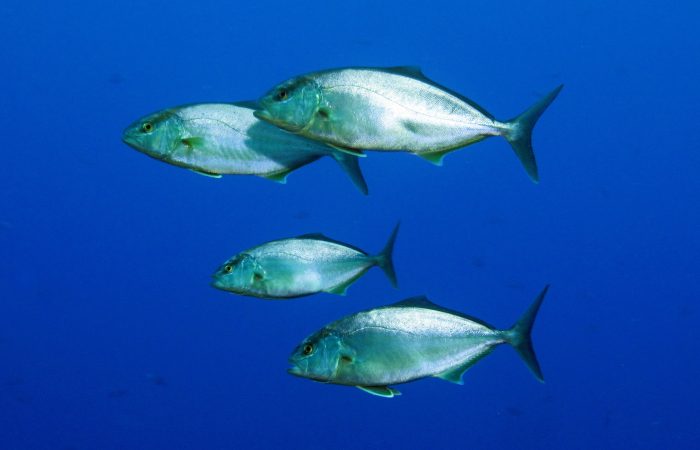 Seriola dumerili, the Greater Amberjack is a member of the jack family, which consists of typically large, fast-swimming pelagic fish of tropical and warm-temperate seas, occurring from coastal bays and lagoons to open ocean.  It is widely distributed in all warm and temperate waters of the world’s oceans, including the Mediterranean Sea, the Atlantic Ocean, the Pacific Ocean and the Indian coasts.

The genus Seriola belongs to the family Carangidae, order Perciformes, class Actinopterygii, phylum Chordata and kingdom Animalia.  The Greater Amberjack may reach 190 cm in length and could weigh 80 kg.  It usually lives between 20 and 70 m of depth (with a maximum of 360 m).

Seriola dumerili is mostly bluish grey or brownish (darker above, whitish below), often with a broad, diffuse, yellowish or amber stripe running along the mid-side.  A dark olive-brown stripe extends from the snout through the eye to the point where the spinous dorsal fin begins.

Adults are found in deep seaward reefs; occasionally entering coastal bays.  They are powerful hunters and feed primarily on fishes such as the bigeye scad and also on invertebrates.  Small juveniles associate with floating plants or debris in oceanic and offshore waters.  Juveniles form small schools or otherwise stay solitary.  The eggs are pelagic.

The Greater Amberjack is oceanodromous.  It migrates within oceans typically between spawning and different feeding areas, as tunas do.  Migrations are cyclical, predictable and may cover more than 100 km.

The photo of these 4 juvenile Greater Amberjacks was taken at a depth of 20m at Reqqa Point on Gozo’s north coast.