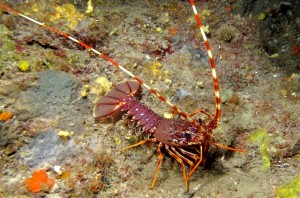 The Spiny Lobster, also known as Crayfish is quite common in the Mediterranean Sea.  It lives on rocky exposed coasts below the intertidal zone, mainly at depths of 20 to 70 metres.

Palinurus elephas may reach up to 60 cm long, although rarely longer than 40 cm.  The adults are reddish-brown with yellow spots.  The carapace is slightly compressed and lacks lateral ridges.  It is covered with forward pointing spines, with the supra-orbital spines prominent.  The antennae are very heavy and spiny.  Their flagellum is tapering and is even longer than the body.  The first walking leg (pereopod) is provided with subchela (the distal end of a limb developed as a prehensile structure).  The fourth segment (merus) of this leg has a characteristic row of spines.

The breeding season is in September and October, with the female brooding the reddish eggs.  These eggs hatch about six months later in the spring as flattened, leaf-shaped, planktonic larvae (phyllosoma larvae).

It is nocturnal and feeds on small worms, crabs or dead animals, hiding in rock crevices or caves during the day.

This Spiny Lobster was found at San Dimitri Cave, on Gozo’s northwest coast.