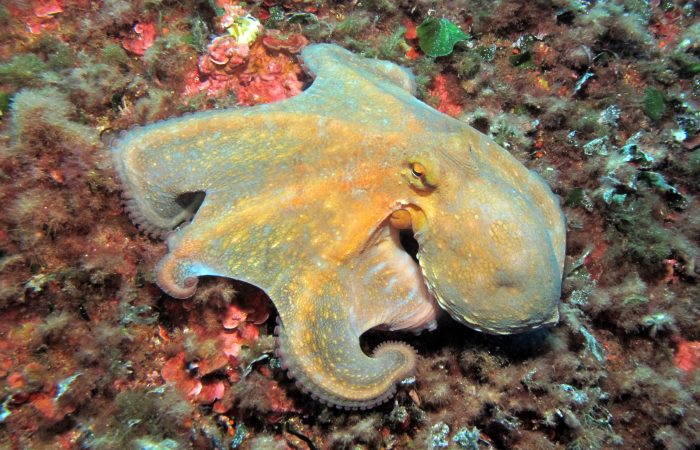 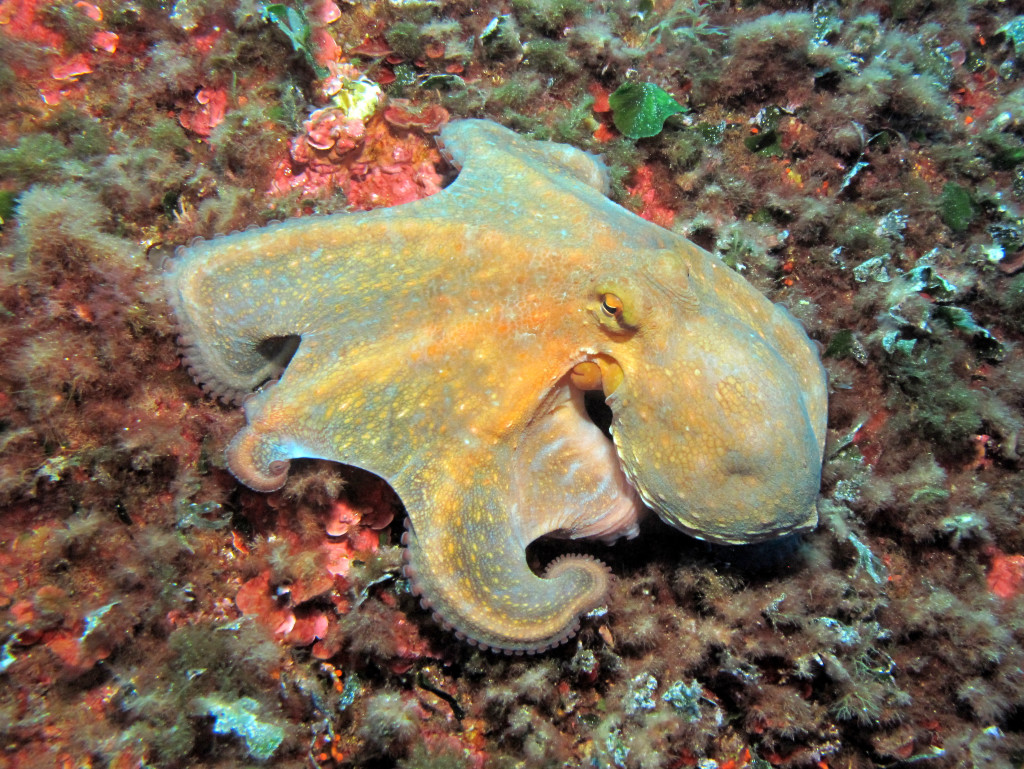 Octopus vulgaris is a mollusc belonging to the family Octopodidae, order Octopoda, class Cephalopoda, phylum Mollusca and kingdom Animalia.  The animal belongs to the Superphylum Lophotrochozoa, being considered a protostome and having thus a coelom.

The Common Octopus grows to 25cm in mantle length with arms up to 1m long.  It hunts at dusk.  Crabs, crayfish, and bivalve mollusks (two-shelled molluscs such as cockles) are preferred, although the octopus will eat almost anything it can catch.  It is able to change colour to blend in with its surroundings, and is able to jump upon any unwary prey that strays across its path.  The prey is paralyzed by a nerve poison, which the octopus secretes in its saliva, and the octopus is able to grasp its prey using its powerful arms with their two rows of suckers.   If the victim is a shelled mollusc, the octopus uses its beak to punch a hole in the shell before sucking out the fleshy contents.

Training experiments have shown the common octopus can distinguish the brightness, size, shape, and horizontal or vertical orientation of objects.  They are intelligent enough to learn how to unscrew a jar and are known to raid lobster traps.  Octopus vulgaris is the only invertebrate animal protected by the Animals (Scientific Procedures) Act 1986 in the UK; it was included because of its high intelligence.

Octopus vulgaris is typically found in tropical waters throughout the world, such as the Mediterranean Sea and East Atlantic.  They prefer the floor of relatively shallow, rocky, coastal waters, often no deeper than 200 meters.  They are exposed to a wide variety of temperatures in their environments; however their preferred temperature ranges from about 15 °C to 16 °C.   In especially warm seasons, the octopus can often be found deeper than usual in order to escape the warmer layers of water.

Primarily, the octopus situates itself in a shelter where a minimal amount of its body is presented to the external water, which would pose a problem for an organism which breathes solely through its skin.  When it does move, most of the time it is along the ocean or sea floor, in which case the underside of the octopus is still obscured.  This crawling increases metabolic demands greatly, requiring they increase their oxygen intake by approximately 2.4 times the amount that is required for a resting octopus.

The octopus does sometimes swim throughout the water, exposing itself completely.  In doing so, the octopus uses a jet mechanism that involves creating a much higher pressure in their mantle cavity that allows them to propel themselves through the water.  As the common octopus’ heart and gills are located within their mantle, this high pressure also constricts and puts constraints on the various vessels that are returning blood to the heart.  Ultimately, this creates circulation issues and is not a sustainable form of transportation, as the octopus cannot attain an oxygen intake that can balance the metabolic demands of maximum exertion.

This photo was taken at a depth of 20m near The Chimney, a natural formation at Dwejra, not far from the famous Blue Hole and Azure Window, on Gozo’s west coast.