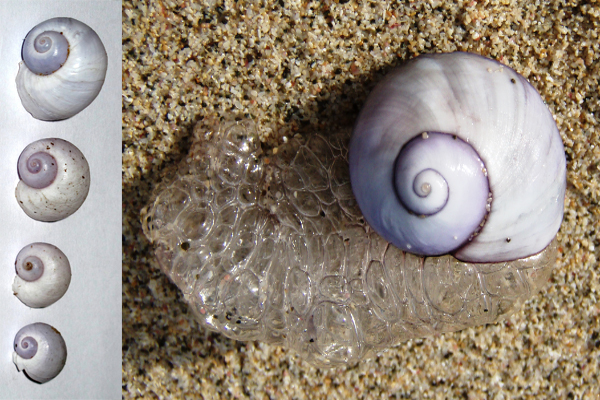 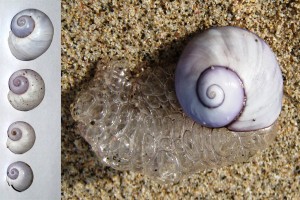 The common purple snail is a species of holoplanktonic sea snail, a marine gastropod mollusc in the family Janthinidae, the violet snails or purple storm snails.

These snails secrete a substance (chitin) that hardens around little air bubbles. Collectively, this mass of clear-hard bubbles forms a raft.  The snails then attach their “foot” to this raft and spend their life floating around on it.  The shell is paper-thin to allow the animal to float upside down at the surface.  If they lose hold of their “raft”, the snail will sink to the bottom and die.  They truly are perpetual castaways – their fate tied to the whims of the ocean’s current.

Purple snails are also carnivorous, feeding almost exclusively on their favorite food – the medusa of cnidaria.  (Cnidaria include jellyfish, anemones, and corals.  Their larval stage, which looks like a small jellyfish, is called a medusa.)  They have no means of propulsion, so they must drift until their prey finds them.  They are often found in large groups and sometimes become stranded on beaches when they are blown ashore by strong winds.

The snail’s shell is reverse counter-shaded, because of its upside-down position in the water column.  There is a light purple shade on the spire of the shell, and a darker purple on the ventral side.  The animal has a large head on a very flexible neck.  The eyes are small and are situated at the base of its tentacles.

The snail begins life as a male, later changing to the female of the species.  The eggs are held by the female until they develop into a larval form.

The shell is almost smooth with a slightly depressed-globose shape.  It is thin and delicate, and is without an operculum.  The colour of the shell is violet, with a paler upper surface. The height of the species shell is up to 38mm, the width to 40mm.

These shells were found at the Blue Hole and at Mġarr ix-Xini, on Gozo’s west and south coast respectively.