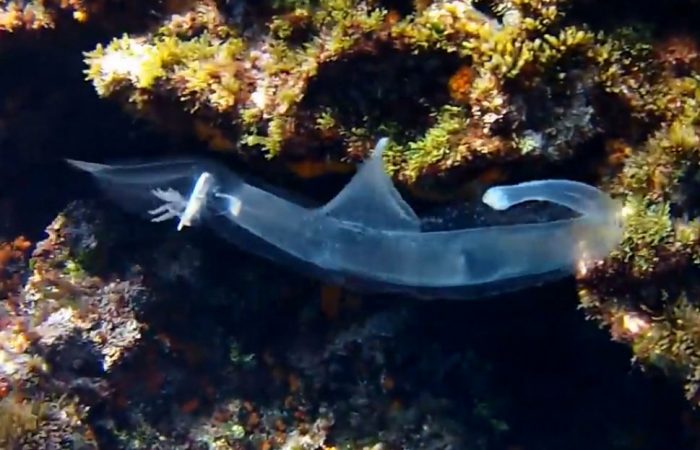 Pterotrachea coronata is a species of large floating sea snail, a pelagic gastropod mollusc in the family Pterotracheidae.

The family Pterotracheidae is in the clade Littorinimorpha, and as such it is related to families as the tritons (Ranellidae) and the tun shells (Tonnidae).

The shell is present only in larvae and is lost following metamorphosis. Note the exposed gills projecting dorsally.

The body length is the greatest among the pterotracheids and can reach a maximum length of 330mm. It also has the most streamlined body shape and the trunk is elongate and cylindrical. The proboscis is long and pointed, terminating in a small buccal mass. The trunk is long and slender, with ventro-lateral folds of cutis anterior to the swimming fin that form a concave bib.

The visceral mass is long and slender (the highest length to width ratio in the genus), and the basal part of its length is deeply imbedded in the posterior end of the trunk. The tail is large and laterally flattened, creating a broad surface area that aids in burst swimming, attributable to strong side-to-side flexion of the trunk and tail. During burst swimming, the proboscis is tucked into a ventral groove in the anterior one-half of the trunk created by the ventro-lateral folds of cutis.

When viewed dorsally the eyes have a rectangular shape with a retinal base somewhat wider than the lens. A small fin sucker is located on the mid-ventral surface of the swimming fin in males only. Females have a long egg string that extends below the visceral nucleus.

During the day, the Sea Elephant swims with its ventral side directed upward, which facilitates visual location of prey silhouetted against the lighted surface waters. Active swimming occurs when it pursues its prey or when disturbed by predators. At other times it remains neutrally buoyant, floating curled into a loose ball. At night, the Sea Elephant also remains neutrally buoyant, but it is oriented with its ventral side directed downward. In this position, Pterotrachea coronata hypothetically could locate bioluminescent prey beneath them.

The geographical distribution is cosmopolitan in tropical to subtropical waters.

In 20+ years of regular all-year-round diving around the Maltese Islands, this is the first time that I have encountered this species. I thank Prof. P. J. Schembri from the Department of Biology at the University of Malta who helped me identify this species.