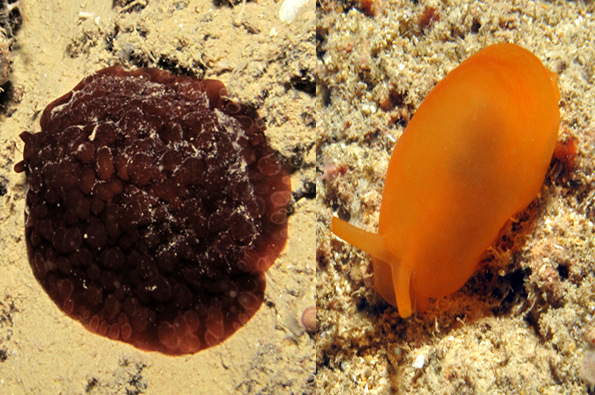 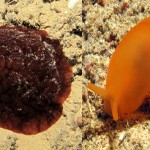 Berthella ocellata, the species to the left, can reach more than 50mm in length.  The main features of this species are the domed mantle, its dark brown colour and the lightly coloured ocelli fringed with white, which are characteristic and referred in the specific name.  The head veil is quite wide and pigmented of a slightly lighter brown than the body.  The rhinophores are articulate, light brown coloured and arranged in divergent orientation, towards both sides.  The mantle has numerous, different sized, round bumps that match the ocelli.  These bumps are fringed with white circles that can connect with those of adjacent ocelli.  The gill, located in the right side of the body, between the mantle and the foot, is bipinnate, yellowish and may have up to 25 lamellae on either side of the spine, which can be dotted in light brown.  The foot is wide and can emit defensive acid secretions.  Very little is known about feeding, breeding and other details of its biology.

Berthella aurantiaca, the species to the right, usually measures between 20 and 30mm in length.  The body colour is orange or red without markings or other colour patches.  The body is convex with occasional folds on the notum and the dorsal mantle is relatively small and does not completely cover the foot.  The flattened oral veil is highly developed when the animal is moving and has a trapezoidal shape.  The rhinophores are tubular and open at the distal end.  The gill is located under the right edge of the mantle, is bipinnate and has between 15 and 18 lamellae on both sides of the rachis.  The gill colour is slightly lighter than the rest of the body.  The foot is very wide, protruding from all the edges of the notum: front, sides and back.

Both of the above two species are usually found in dark caves, crevices or under large rocks, always at relatively shallow depths.

These photos were taken at a depth of 17m inside Billingshurst Cave, near Reqqa Point on Gozo’s north coast.