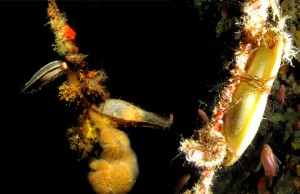 An egg case or egg capsule, colloquially known as a mermaid’s purse or devil’s purse, is a casing that surrounds the fertilised eggs of some sharks, skates and chimaeras.  They are made of collagen protein strands.

Because they are lightweight, they are commonly washed up by the sea, often found at the strandline, the farthest point of the high tide.  The egg cases that wash up on beaches are usually empty, the young fish having already hatched out.  Furthermore, egg cases are often found in commercial fishing gears like nets and pots, and on the sea floor during surveys using an ROV.

In our case, we encounter egg cases while technical diving around the Island of Gozo.

Among the 9 extant orders of sharks, egg-laying is found only in three: Bullhead Sharks, Carpet Sharks and Ground Sharks.

The ground sharks, order Carcharhiniformes, are the largest order of sharks.  With over 270 species, carcharhiniformes include a number of common types, such as catsharks, swellsharks and the sandbar shark.

Some catsharks (Scyliorhinidae) and the finback sharks in the genus Proscyllium are the only members of their order that lay eggs.  The egg cases of catsharks are purse-shaped with long tendrils at the corners that serve to anchor them to structures on the sea floor.

The size of egg cases vary; those of the Small-Spotted Catshark or Lesser Spotted Dogfish, Scyliorhinus canicula, are around 5 centimetres long, while those of the Greater Spotted Dogfish, Scyliorhinus stellaris, are around 10 centimetres.  That excludes the four long tendrils found in each corner, which assist in anchorage.  Egg cases from rays vary in that they have points rather than tendrils.  The colours and shapes of egg cases also vary greatly from species to species.

Egg cases are deposited in pairs on the sea floor, and hatchlings are believed to emerge within 9 months.  Gestation can take longer, up to 12 months or more for deep sea catsharks which lay their eggs in very cold water.  If an egg case is still moist (not dried out) and has no visible hole, it is probably still occupied.

These photos were taken at Dwejra Point on Gozo’s west coast at depths varying from 60m to 70m.