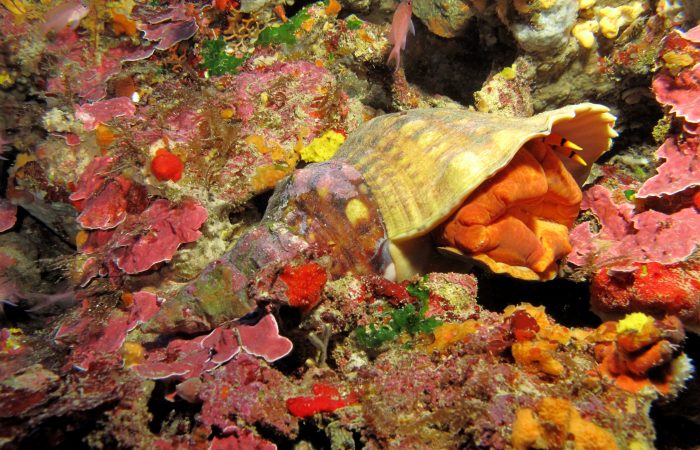 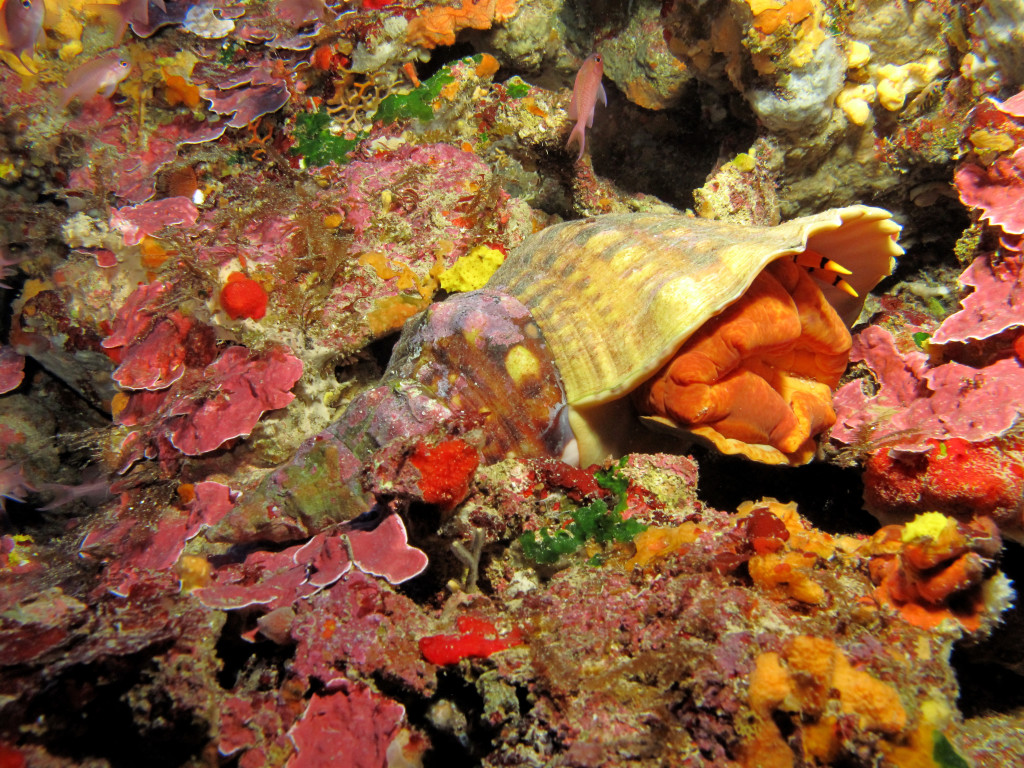 Charonia is a genus of very large sea snails, commonly known as Triton’s trumpets, Triton Shells or Tritons.  The common name « Triton’s trumpet » is derived from the Greek god Triton, who was the son of Poseidon, god of the sea.  The god Triton is often portrayed blowing a large seashell horn similar to this species.

Charonia lampas is a species of predatory sea snail, a marine gastropod mollusk in the family Ranellidae, superfamily Tonnoidea, class Gastropoda, phylum Mollusca and kingdom Animalia.  This marine species has a wide distribution: the Mediterranean Sea, the North Sea, the Atlantic Ocean and the Indian Ocean.

The Pink Lady (Charonia lampas) is not to be mistaken with the more frequently seen Triton Snail (Charonia variegata).

Unlike pulmonate and opistobranch gastropods, tritons are not hermaphrodites; they have separate sexes and undergo sexual reproduction with internal fertilization. The female deposits white capsules in clusters, each of which contains many developing larvae. The larvae emerge free-swimming and enter the plankton, where they drift in open water for up to three months.

Adult tritons are active predators and feed on other molluscs and starfish.  The triton grips its prey with its muscular foot and uses its toothy radula (a serrated, scraping organ found in gastropods) to saw through the starfish’s armoured skin.  Once it has penetrated, a paralysing saliva subdues the prey and the snail feeds at leisure, often beginning with the softest parts such as the gonads and gut.  Tritons ingest smaller prey animals whole without troubling to paralyse them, and will spit out any poisonous spines, shells, or other unwanted parts later.

The protoconch of the Pink Lady is multispiral, normally eroded except on very juvenile specimens.  The teleoconch consists of 8-9 whorls with a moderately high, conical spire and convex whorls, the last one ample and making up slightly more than two-thirds of the total height.  The spire whorls are vaguely shouldered, with very flat spiral cords separated by poorly defined, rather narrow interspaces, the shoulder covered by a much broader and flatter cord and commonly, but not always, bearing a spiral series of knobs, paralleled to the abapical side by lesser flat cords with or without spiral rows of knobs.

The large aperture is oval in shape, with an elaborate peristome.  The outer lip is flaring, thickened at a short distance from the edge and with internal denticles.  The inner part of the peristome shows an apprised parietal callus continued into a foliated columellar callus, which has a raised edge overhanging the siphonal canal on large specimens, and bears indistinct ridges towards the edge.

The colour pattern is very characteristic, with articulated spiral bands of light patches on the knobs and dark brown in the interspaces, alternating with medium brown uniform bands.  The peristome is white with dark brown denticles on the outer lip and a brownish to reddish hue on the edge of columellar callus.

The genus Charonia is known in the fossil records from the Cretaceous to the Quaternary (age range: from 94.3 to 0.012 million years ago).  Fossils are found in the marine strata throughout the world.

This photo was taken at a depth of 59m near The Chimney, a natural formation at Dwejra, not far from the famous Blue Hole and Azure Window, on Gozo’s west coast.