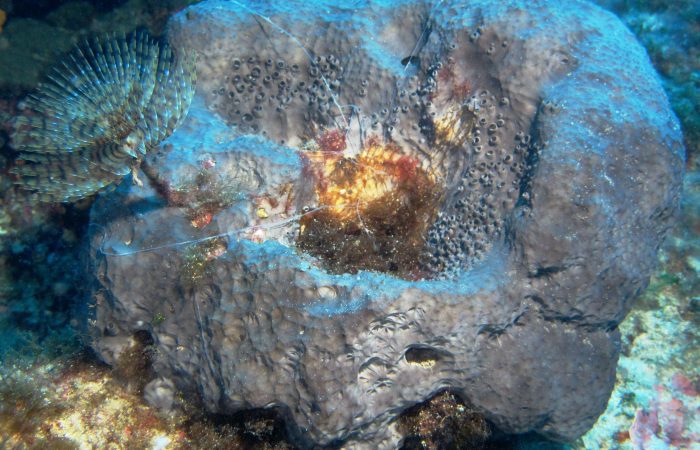 Spongia officinalis, better known as a variety of Bath Sponge, is a commercially used sea sponge.  Individuals grow in large lobes with small openings and are formed by a mesh of primary and secondary fibres.  It is found throughout the Mediterranean Sea, thus also around the Maltese Islands.

Spongia officinalis was first described by Carl Linnaeus in 1759.  The common names ‘Bath Sponge’, ‘Fina Dalmata’ and ‘Matapas’ are usually used to refer to this species.  Sponge fishing in the Mediterranean has been in practice since ancient times.  Aristotle even wrote of it around 350 BC.

The use of the Bath Sponge for bathing and other purposes originated in Greece and spread all around Europe during the Middle Ages.  Aside from using the sponge for washing, some of these uses included padding in Roman soldiers helmets, as absorbent material during surgeries, as medicine to help digestive issues, and as a primitive « contraceptive sponge« .

Spongia officinalis is light grey to black in colour.  They are distributed in shallow water (one to 10 meters below the surface) down to 100 meters deep.  They will grow on littoral rocky surfaces, sandy bottoms, and vertical walls in well-oxygenated water.

The Bath Sponge grows in massive, globular lobes with fine openings which are slightly elevated and have cone-shaped voids (conules).  Oscula can either be scattered or at the tip of the lobes.

The Bath Sponge can reproduce asexually via budding or fragmentation.  Sexual reproduction is also common in Spongia officinalis.  Individuals can be dioecious, either male or female, or sequential hermaphrodites, meaning they can alternate between male and female.

Successive hermaphroditism can take place within one reproductive season.  Sperm is formed in spermatic cysts and is free spawned into the surrounding water.  Sperm is captured by females and is transported to oocytes within the sponge where fertilization takes place.  The occurrence of sexual reproduction peaks from October to November.  There is no relationship between age and reproductive ability in Spongia officinalis.

After fertilization, Spongia officinalis embryos develop in choanosomal tissue of the female sponge.  Cleavage of cells begins after fertilization, around November, and is total and equal.  By May, a stereoblastula, or a blastula without a clear central cavity, forms.  From May to July, parenchymella larva, or larva which is a mass of cells enveloped in flagellated cells, develop.  These larvae are released from the adult from June to July.

Like all sponges, the Bath Sponge larvae are lecithotrophic, meaning they cannot feed as larva and instead rely on energy reserves provided by the mother.  Therefore, they only remain as a free-floating larva for a short period before settling on a benthic surface where they grow into an adult sponge.

The photo of this Bath Sponge was taken at a depth of 30m at Ras il-Ħobż, or as otherwise known Middle Finger on Gozo’s south coast. 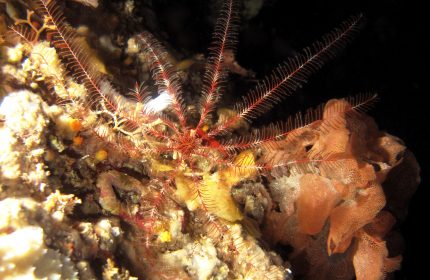