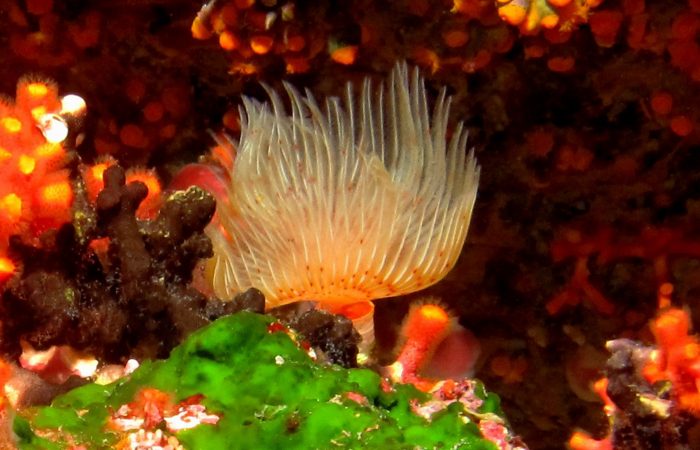 Protula tubularia, the Red-Spotted Horseshoe, also known as Slime Feather Duster, is a species of tubeworm belonging to the Serpulidae family.  Its distribution area extends across the North Sea and the Mediterranean Sea.  In the Atlantic Ocean it is found from Norway, across Great Britain, along the European and African coast to South Africa.  Sightings from the Gulf of Maine and New Zealand are also recorded.

The Red-Spotted Horseshoe forms a white, calcareous tube lacking distinct growth rings in which it lives.  It has an orange-white colouration, with variations being possible.  Such examples include completely white or completely red colourations.  Its white tube is up to 15cm long and reaches a maximum diameter of 1cm.  The tentacle rim only reaches a diameter of 3cm.  The tube is smooth and less flexible than it is at similar species.

Protula tubularia has a small, elongated, segmented body that tapers towards the posterior and grows to 0.3 to 0.5cm in length.  The body is divided into a head, a short, green, anterior region of eight segments and a much longer reddish-orange, posterior region of up to 90 to 120 segments.  The head is reduced and has two gill lobes each bearing 20 to 45 white or pinkish, slightly spiralled tentacles that are pinnate in two rows and marked with paired red blotches and numerous eyespots.  The head is surrounded by a collar that bears finely toothed chaetae and extends dorsally to a distinctive, large, lobed membrane either side of the thorax.

Chaetae are present on all segments except the first.  Chaetae in the thoracic region are pale golden, long and slender and display narrow wings.  Those in the posterior region are longer but lack narrow wings.

Protula tubularia lack the distinctive stalked operculum that is characteristic of Serpula vermicularis.  The operculum of the latter species is calcareous, funnel shaped with radial grooves and a serrated circumference.

The Red-Spotted Horseshoe lives on a solid ground mostly near the coast, though it can also be found at depths of up to 100 metres.  It is usually solitary but can also occur in small colonies.  It never leaves its tube!

The diet of Protula tubularia consists of plankton, which it filters out of the water due to its tentacle crown.  If it feels threatened, it simply moves back into its tube.  Reproduction normally takes place from July to September.

The photo of this Red-Spotted Horseshoe was taken at a depth of 10m at Reqqa Point on Gozo’s north coast.