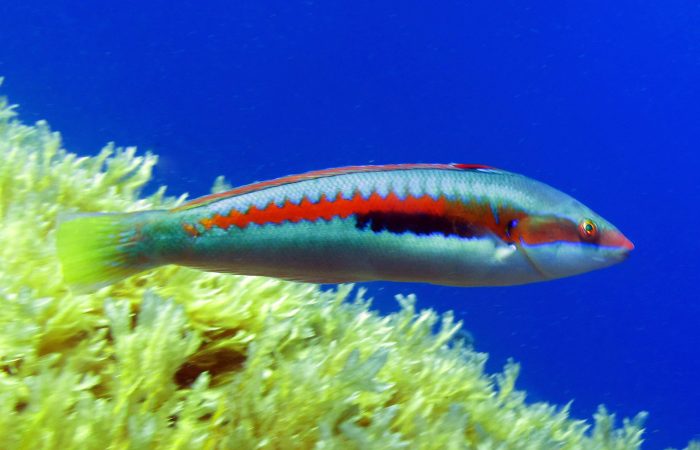 Like many wrasses, Coris julis is a sequential hermaphrodite.  All start in the smaller initial phase.  These initial-phase individuals (both females and males) can turn into the larger secondary-phase males.  At a length of about 18 cm, all individuals are secondary-phase males.  The maximum length for the species is 25 cm.  There is a marked difference in the appearance of the two phases.  In the Mediterranean Sea, the secondary-phase male is green, blue, or brown, with white belly, a dark blue spot over the ventral fin, and a bright orange band on the side, while the smaller primary-phase females and males are brown with yellowish sides and white bellies.

The Mediterranean Rainbow Wrasse generally occurs in littoral and inshore coastal waters around rocks and over seagrass beds.  During the winter it can be found in deeper waters.  It is typically found in aggregations but can also be found as solitary individuals, especially in rocky habitats.  During the night, or when disturbed, it can bury itself in the sand.  The eggs and larvae are planktonic.

Although Coris julis is usually found at depths of 0 to 60 metres, it can also occur as deep as 120 metres.  It feeds on small gastropods, sea urchins, worms, shrimps, isopods and amphipods.  Small individuals are known to clean other fishes.

It reaches sexual maturity at one year and is a protogynous hermaphrodite with pronounced sexual dimorphism.  The females change to males before reaching 18 cm in length.  All individuals above 18 cm in length are males.  Sex change can take from several weeks up to 5.5 months.

The photo of this Mediterranean Rainbow Wrasse was taken at a depth of 10m at Reqqa Point, on Gozo’s north coast.