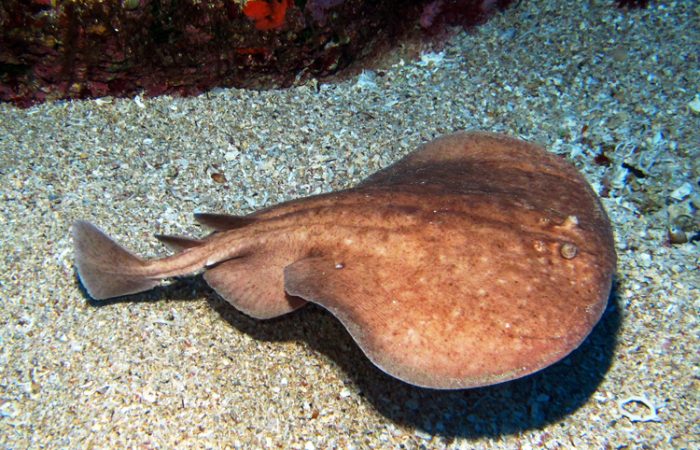 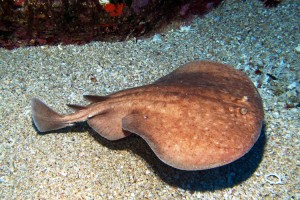 The Marbled Electric Ray is found in the coastal waters of the eastern Atlantic Ocean from the North Sea to South Africa and all around the Mediterranean Sea.  This benthic fish inhabits rocky reefs, sea grass beds, and sandy and muddy flats in shallow to moderately deep waters.  It can survive in environments with very little dissolved oxygen such as tidal pools.  The ray stops breathing entirely when the oxygen partial pressure in the water drops below 10–15 Torr, and can survive such a state for at least five hours.

The marbled electric ray has a nearly circular pectoral fin disc and a muscular tail that bears two dorsal fins of nearly equal size and a large caudal fin.  It can be identified by the long, finger-like projections on the rims of its spiracles, as well as by its dark brown mottled colour pattern, though some individuals are plain-coloured.  Males and females typically reach 36–38cm and 55–61cm long respectively.

Solitary and slow-moving, the marbled electric ray may remain motionless for several days at a time.  It is more active at night and spends much of the day buried in sediment with only the eyes and spiracles showing.

Like other members of its family, the marbled electric ray can produce a strong electric shock for attack and defence, produced by a pair of electric organs derived from muscle tissue.  Each electric organ consists of 400–600 vertical columns, with each column composed of a stack of roughly 400 jelly-filled “electroplates” that essentially act like a battery.  This ray has been measured producing up to 70–80 volts, and the maximum potential of the electric discharge has been estimated to be as high as 200 volts.  The strength of the electric shock declines progressively as the ray becomes fatigued.

The marbled electric ray is an ambush predator that employs electricity to capture prey.  Vision is of little importance in hunting, as the ray’s eyes are often obscured as it lies buried on the bottom.  Instead, it likely relies on the mechanoreceptors of its lateral line, as it only attacks moving prey such as gobies, hake, sea bass, mullets, sea breams, goatfish, damselfish, wrasses, conger eels, flatfish and even Cephalopods such as squid and cuttlefish.

The shock delivered by the marbled electric ray can be painful but is seldom life-threatening, although there is a danger of a shocked diver becoming disoriented underwater.  Its electrogenic properties have been known since classical antiquity, leading it to be used in medicine.  The ancient Greeks and Romans applied live rays to those afflicted with conditions such as chronic headaches and gout, and recommended that its meat be eaten by epileptics.

This photo was taken at Mġarr ix-Xini on Gozo’s south coast.