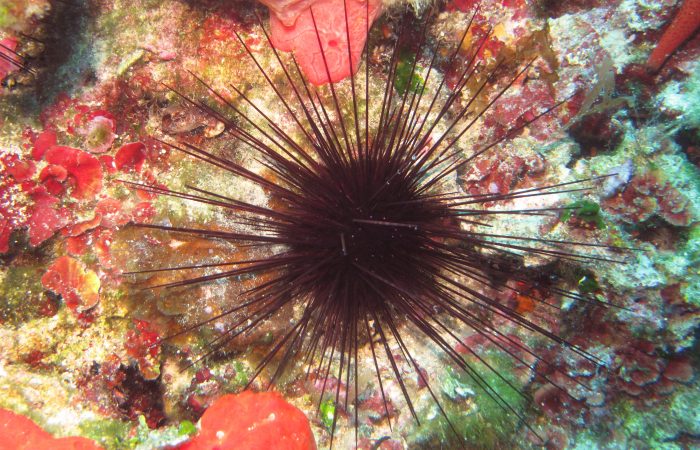 Centrostephanus longispinus, the Hatpin Urchin (a.k.a. Long-Spined Sea Urchin), is a species of sea urchin which occurs mainly in the Mediterranean Sea but also on the continental shelf on either side of the Atlantic Ocean.

Centrostephanus longispinus has a small central test and spines up to 30 centimetres in length.  These are toxic and can cause a painful sting.  The spines are of varying length and are mobile and used for locomotion.  There are a number of club-shaped spines on the oral (lower) surface, a characteristic that this species shares with Centrostephanus besnardi and Centrostephanus coronatus but not other members of the genus.

The depth range of the Hatpin Urchin is between 40 and 210 metres.  It avoids direct sunlight and this is why it is found on hard substrates, cavities and rock crevices.  These sea urchins are not usually found on living reefs, perhaps because there is seldom macro-algae growing there or because predatory fish hiding among the coral heads consume the juvenile sea urchins.  In the Caribbean Sea and the Gulf of Mexico, this urchin is usually found on algae or on broken coral substrates, particularly the rubble remains of dead ivory bush coral (Oculina varicosa).  It forms part of a species-rich community which includes other sea urchins, mollusks, polychaete worms, crabs and encrusting organisms.

Studies and examination of the contents of this urchin’s stomach have shown that Centrostephanus longispinus largely feeds on several species of red algae.  At times of year when this is not available it probably eats small invertebrate prey.  In the laboratory they will feed on the seagrass Thalassia testudinum and may attack the starfish Narcissia trigonaria if hungry enough.

Reproduction is sexual and external.  Individuals have separate sexes.  During the breeding season it is possible to observe groups of male and female individuals.  Each one then emits its gametes in the form of clouds, in response to pheromone emissions.

Fertilization takes place in full water and, after division of the egg, will result in a pelagic larva, larva pluteus.  The appearance is very different from the adult, which will progressively evolve towards its final form.  Juvenile individuals are even rarer than their parents.  Their growth would be 1 millimeter per month.  Their arrival near the coast would remain episodic and sometimes spaced a few years.

The photo of this Hatpin Urchin was taken at a depth of 36m at Reqqa Point, on Gozo’s north coast.