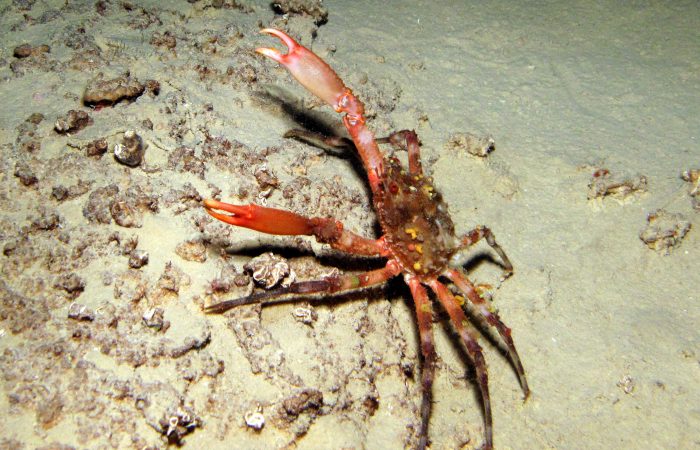 Herbstia condyliata, the Cave Spider Crab (a.k.a. the Wrinkled Spider Crab or the Red Spider Crab), is a marine crab species found all along the eastern coast of the Atlantic Ocean, coastal waters off western Europe and the entire Mediterranean Sea, thus also around the Maltese Islands.

The genus name Herbstia was created by Henri Milne-Edwards in 1834 and dedicated to Johann Friedrich Wilhelm Herbst (1743-1807), German entomologist from Halle, specialist in beetles who also worked on crabs and who described many species of crustaceans between 1782 and 1804.  The specific name condyliata derives from the Latin word condylus meaning joint (as in joint of the fingers of the hand, swelling formed by the joints).

Herbstia condyliata inhabits caves, coralligenous habitats and rocky areas inside cracks and crevices.  Divers quite often observe this crab inside dark caves or at night on hard walls and substrates, sometimes on the sediment.  At the bathymetric level, it is found from the coastline to about fifty meters deep, absolute maximum 80 meters.

The Cave Spider Crab is a medium-sized crab.  Its shell is triangular with a rounded posterior edge, pear-shaped longer than wide (47mm x 38mm maximum in a male), quite convex in shape, and bears different small tuber-like stems.  At the rear of the shell, a median hump with three small spines is characteristic of the species.  The horns of the rostrum are short and end in two divergent triangular points separated by a large space.

The pincers of Herbstia condyliata are very strong in the adult male and much weaker in the juveniles and in the females.  The pincers also bear tuber-like stems on the upper edge but most of the ‘palm’ (the propodite) is smooth.  The legs are relatively long (twice the width of the shell).

The Cave Spider Crab‘s eyes are red.  Its general colour is a mottled reddish-brown.  In large specimens, the ‘hands’ of the pincers are orange to pink.  The legs are ringed with alternately light and dark areas.  In dull-greyish environments, rich in suspended fine particles, the general colour is then grey-dirty because of deposits on the carapace and / or microscopic epibionts developing there.

Very young specimens appear to have mushroom-shaped spines comparable to those found on Eurynome aspera.  These juveniles are not very colourful and quite diaphanous (that is to say, they let the light through without being transparent).  They are decorated like Christmas Trees, borrowing various elements from the surrounding environment.  For example Alcyonium coralloides polyps, elements of sponges or other organisms which they fix on their carapace and on their legs.  This behaviour is gradually lost during growth.

Very little data exists on the diet of this species.  It is likely that the Herbstia condyliata feeds on stationary or not very mobile organisms, such as annelids, mollusks and small crustaceans.

The female Cave Spider Crab is ovigerous from April to September.  They begin to reproduce as soon as their shell has reached a length of 29mm.  The life cycle begins with an egg, which is usually fertilised, but may instead be produced by parthenogenesis.  This egg hatches into a pre-larva or pre-zoea.  Larval development has two zoea stages, ensued by a megalopa (post-larva).  This is followed by metamorphosis into an immature form, which broadly resembles the adult, and after further moults, the adult form is finally reached.

The photo of this Cave Spider Crab was taken at a depth of 16m inside Billingshurst Cave near Reqqa Point on Gozo’s north coast.