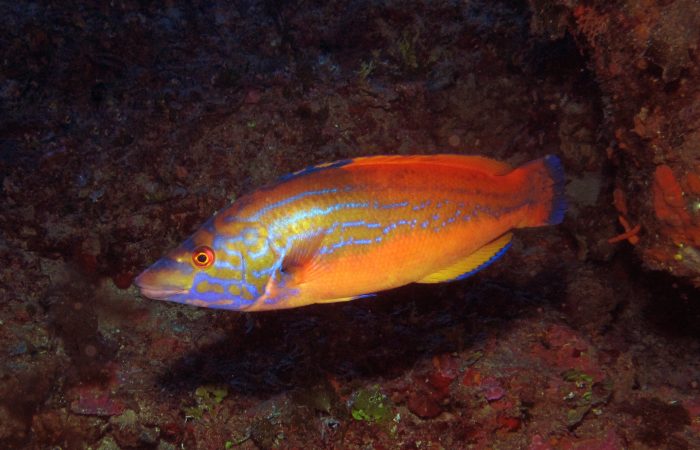 Labrus mixtus, the Cuckoo Wrasse, is a species of wrasse native to the eastern Atlantic Ocean and the coastal waters of the Mediterranean Sea.

Wrasses (the family Labridae), are the most abundant and conspicuous fishes on tropical reefs around the world.  They are second largest family of marine fishes and the third largest family in the Perciformes order, containing approximately 60 genera and roughly 500 species.  Wrasses appear in a diverse range of colours, shapes, and sizes, often varying considerably within individual species.

The name cuckoo wrasse comes from Cornish fishermen who associated the blue markings with bluebell flowers.  In the Cornish language, a bluebell is bleujenn an gog, literally “the cuckoo flower”.

Members of the wrasse family have scaly bodies, long dorsal fins and robust, flattened teeth.  The Cuckoo Wrasse is one of the most colourful fish that occurs in the Mediterranean Sea.  It has a slender body and head and reaches a maximum length of 35cm.  The female is rose-red to orange-red in colour with three or four black blotches interspersed by white blotches on the back, behind the dorsal fin.  The male has brilliant iridescent blue on its head and blue lines and blotches along the body.  Like many other wrasse species, the older females can change sex to become males with the characteristic iridescent blue coloration.  The distinctive colour of this species readily distinguishes it from other wrasse species.

The female Cuckoo Wrasse has the ability to change sex when no males are present in the area.  The goldsinny wrasse, Ctenolabrus rupestris, is similar to the female cuckoo wrasse but lacks the three dark spots at the base of the dorsal fin and has a dark spot at the base of the tail fin.

This species is sexually dimorphic.  A slim-line wrasse with a narrow long head and a pointed snout.  The colouration of Labrus mixtus is different between the sexes and very variable.  The female is rose-pink to orange-red in colour with 2 to 3 dark spots interspersed with a number of white spots on the rear dorsal fin and adjacent tail fin.  Young males are similar in colour to the female but lack the dorsal spots.  Older males have dark blue heads with brilliant blue lines and blotches that extend along the flanks.  The rest of the body and the fins are bright orange and the fins also have bright blue markings.  While males can reach up to 35 cm in length, females are generally slightly smaller, reaching 30 cm in standard length.

Labrus mixtus is mainly associated with coralligenous habitats, particularly gorgonians.  It is usually either solitary or found living in pairs in the case of younger individuals in the Mediterranean Sea and also in the Azores.  Although it mainly feeds on crustaceans, the Cuckoo Wrasse may also consume small fishes and molluscs.

It is a protogynous hermaphrodite, and sex reversal is completed in seven months.  It displays marked sexual colour dimorphism, and during the breeding season builds nests of seaweed.  The cuckoo wrasse is oviparous with distinct pairing during breeding.  Males build dish shaped nests, females lay about 1,000 eggs in the nest and the male guards the eggs.

The photo of this Cuckoo Wrasse was taken at a depth of 40m at Reqqa Point, on Gozo’s north coast.