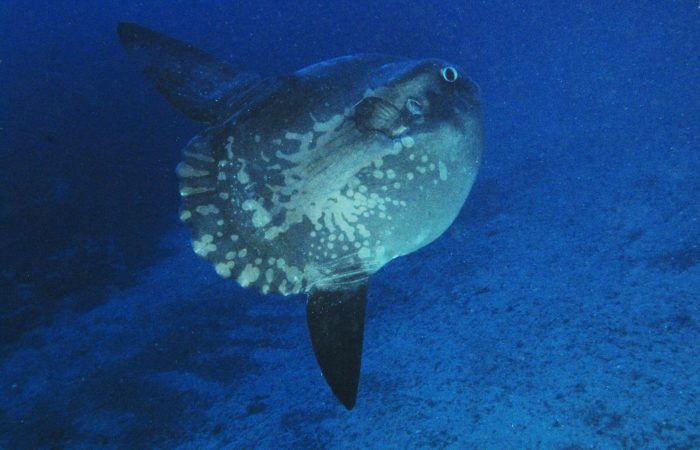 Although in English this fish is known as a Sunfish, in most other languages (such as Italian, German, French, Spanish, Maltese, etc…), the Mola mola is known as the ‘Moon Fish’.

It is the heaviest known bony fish in the world.  It has an average adult weight between 247 and 1,000 kg.  The species is native to tropical and temperate waters around the globe, also in the Mediterranean Sea.  It resembles a fish head with a tail, and its main body is flattened laterally.  Sunfish can be as tall as they are long when their dorsal and ventral fins are extended.

Sunfish live on a diet consisting mainly of jellyfish, but because this diet is nutritionally poor, they consume large amounts to develop and maintain their great bulk.  Females of the species can produce more eggs than any other known vertebrate, up to 300,000,000 at a time.  Sunfish fry resemble miniature pufferfish, with large pectoral fins, a tail fin, and body spines uncharacteristic of adult sunfish.

Adult sunfish are vulnerable to few natural predators, but sea lions, killer whales, and sharks will consume them.

The photo of this Sunfish was taken at a depth of 67m at Għasri Point on Gozo’s north coast.