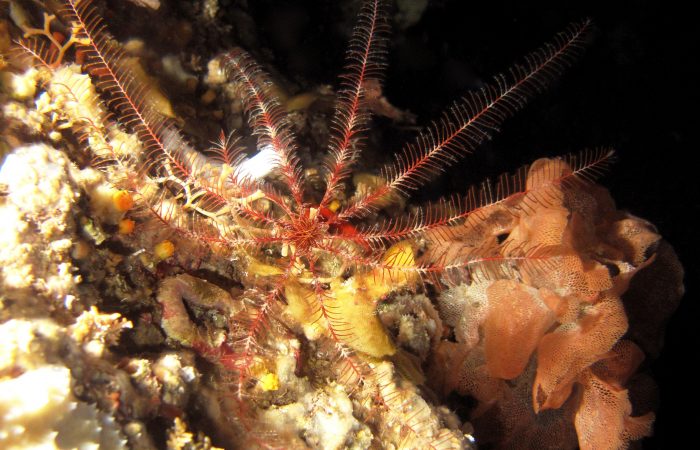 This genus first appeared in the fossil record in the Cretaceous period.  The arms are actually five in number and each arm is bifurcated at the basal end.  Therefore, the number apparently comes to ten.  Each arm bears double rows of alternate small branches, called the pinnules.

Antedon mediterranea has a vestigial stalk, the base of which bears up to forty grasping cirri, articulated prehensile structures with which it can cling to a hard surface.  Above this is the calyx, a small, cup-shaped structure, which is surrounded by five pairs of arms which bear feathery pinnules.  The arms can be rolled up if danger threatens, but when they are extended to feed, they are about 10 cm long.  They are fragile but if one gets broken off, the animal can regenerate it.

The colour of the Mediterranean Feather Star is quite variable and ranges from white to yellow, to orange, red to brown and dark purple.  Sometimes, as in the case of the photo above, this crinoid has bands of contrasting colour.

Antedon mediterranea feeds by filtering out plankton and other small particles from the passing sea water.  The food is then wrapped in mucus and passed by the tube feet down the ambulacral grooves on the arms to the central mouth which is on the upper side of the calyx.  Antedon mediterranea can move around to a limited extent by creeping on its cirri, by “swimming”, alternately raising and lowering its ten arms five at a time, or by “walking” along the seabed by propping itself up on its arm tips and heaving itself along.

The sexes are separate in the Mediterranean Feather Star and the gonads are located in the pinnules of the lower part of the arms.  Spawning takes place annually, mainly in the spring and is believed to be triggered by the production of testosterone in the male and estradiol in the female.  Fertilisation takes place in the water and the embryos are cemented to the pinnules.  They hatch into free-swimming, barrel-shaped doliolaria larvae which can move around using synchronized movements of their bands of cilia.  The production of serotonin stimulates them to settle on the seabed, anchor themselves by temporary stalks, and undergo metamorphosis into juveniles.

Antedon mediterranea is found at depths down to about 80 metres and favours areas with strong currents which bring plenty of food within reach.  It is found on rocky or sandy seabeds rich in algae including encrusting algae, or among sea grasses (Posidonia oceanica).  It hides during the day in concealed locations emerging at night into more exposed areas.  It is gregarious and is often found clinging to sea whips, bryozoans, algae or sea grasses.

The photo of this Mediterranean Feather Star was taken at a depth of 24m inside Coral Cave in Dwejra, not far from the Blue Hole on Gozo’s west coast.